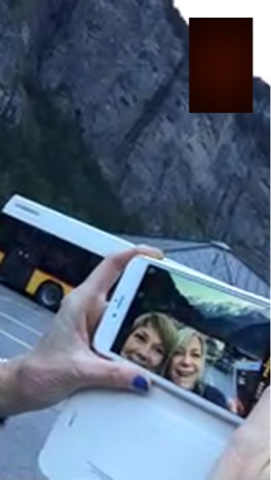 Winding down the trip, this was another travel day for Sharon and Janie. As they waited for the bus outside the Hotel Stcheclburg, Sharon called me via FaceTime. I grabbed the screen shot shown above while Janie was taking a selfie with Sharon!

They took the bus back to Lauterbrunnen and then a local train to Interlaken. They caught a train from Interlake to Burne. Checking their luggage at the railroad station, they walked around Burne. Wandering into a store in Burne, they heard a song from Milo Greene's second album!

Eventually, they took the train from Burne to the Gevena Airport. They are spending the night at the Movenpick Hotel and Casino near the airport.

In one of those odd twists of fate, Mary Maloney is in Switzerland; they met up with her. The three of them finished the day with hamburgers at the hotel. Sharon and Janie have an early morning flight back to San Francisco tomorrow.