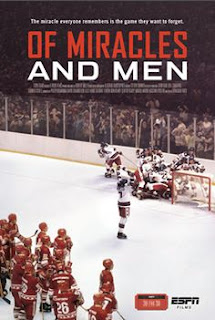 While Sharon was on her European holiday, I watched Of Miracles and Men. This is the twenty-seventh installment of ESPN's 30 for 30 volume II. An episode guide for Vol II is here. I have one more film from volume II to finish: Angry Sky. 30 for 30 Volume 3 debuts on October 13, 2015.

Billed as the story of Soviet hockey team that lost to the Americans in the 1980 Olympics at Lake Placid, it is really a broader look at Soviet hockey. Starting with the development of the hockey program after World War II, it chronicles the rise of the program through the 1970s.

The first part of the film focuses on Anatoli Tarasov. Known for this unusual training methods, he built the program from scratch starting in 1946. Tarasov is considered the father of Russian hockey and established the Soviet Union national team as the dominant force in international competition. The Soviet hockey team won the gold medal at the Olympics in 1964, 1968, 1972 and 1976.

The film shifts to Viktor Tikhonov. He took over the Soviet Olympic hockey team in 1975. Tikhonov was known for his dictatorial coaching style. He exercised nearly absolute control over his players' lives. Tikhonov was the coach of the team when it lost to the Americans in the 1980 Olympics. He is in the villain in the film. I didn't realize that Tikhonov had pulled the star goalie half through the game at Lake Placid in 1980.

The last half of the film is largely told through the eyes of Slava Fetisov. Fetisov was a star Soviet defenseman. As part of the film, he and his daughter return to Lake Placid.

After the Olympics, the documentary follows Slava Fetisov. He was instrumental in breaking the barrier that had previously prohibited Soviet players from leaving the Soviet Union to join the NHL. Fetisov played in the NHL from 1989 to 1998. He played with the New Jersey Devils and won back-to-back Stanley Cups with the Detroit Red Wings.

This is a very ambitious film. It includes a large number of interviews with the Russia players from the 1980 Soviet team as well as Tarasov's daughter. It is worth looking for; it is one of the best of the Volume II episodes. While Volume I aired over about 15 months, Volume II was broadcast over almost three years. Although my memory of some of the earlier films is a little spotty, I should probably go back and rate all of the episodes like I did for Volume I.
By Heringer at 9/29/2015 06:00:00 AM