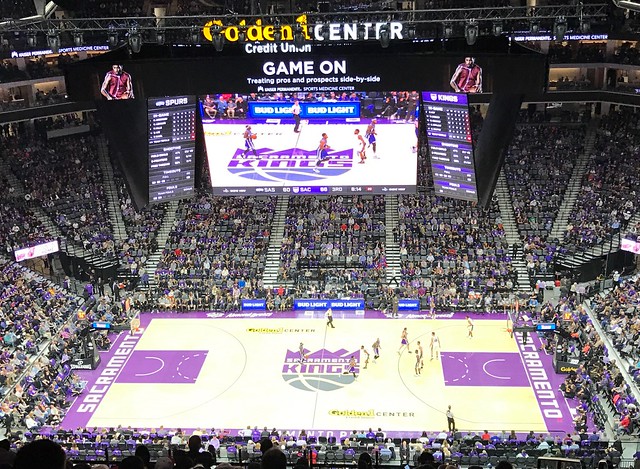 Larkin and I went to the Sacramento Kings versus San Antonio Spurs NBA basketball game. This was the first regular season game in the new Golden 1 Center. The Kings led most of the game until about 3:00 left in the third quarter. A pair of Kawhi Leonard steals from Ben McLemore on successive plays put the Spurs ahead. The Spurs pulled away in the fourth quarter to win by the score of 102 to 94.

DeMarcus Cousins was the high scorer for the Kings. He had 37 points on 10 for 22 from the field, 3 for 5 from three point range and 14 for 16 from the free throw line. Cousins added 16 rebounds.

Kawhi Leonard led the Spurs. He had 30 points on 11 for 21 from the field, 1 for 5 from three point range and 7 for 7 from the free throw line. Leonard added 5 steals. In the first two games of the season, Leonard has averaged 32.5 points and 5 steals a game.

Larkin and I explored the new arena a little bit before the game and at halftime. It is going to take me a while to figure out where everything is. We ran into Dave Sanders and Robby and Danny before the game. At halftime, we talked with Robby, Danny and Snipes.

On a rainy night, I bought a parking spot at the garage at 805 14th street. This is almost 3/4s of a mile from the arena. I am not sure what I am going to do for the next game. I will probably buy a single seat down low before the end of the year.

I couldn't be more pleased that they built the arena downtown. I believe that it is going to have a big impact on revitalizing the downtown. As shown below, there were people everywhere on K Street north of the arena after the game! 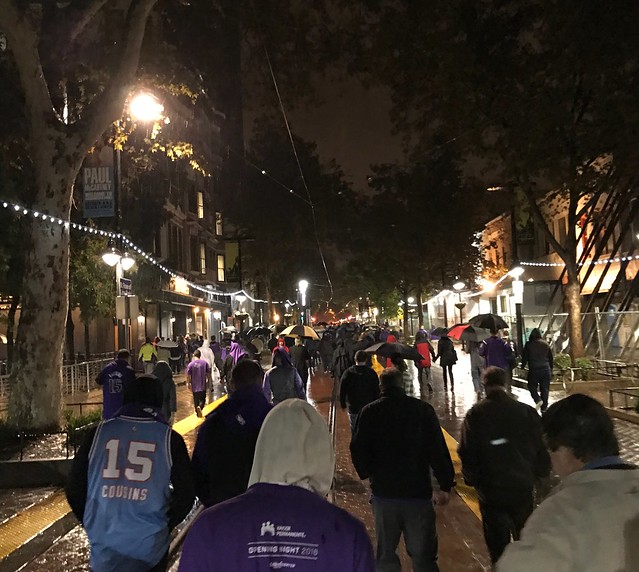