After we finally got up, I wandered across the street for coffee at Starbucks. The plan for the morning was to work out in the Equinox Health Club in the hotel. Sharon did half of a spin class and then lifted, while I ran on the treadmill.

We caught a cab to campus once we got cleaned up. We went to a session entitled: Achieving Health Equity - The Role of the Healthcare System. With both of us starving, we went straight from the presentation to the tailgate for the soccer and football games to grab something to eat. The food was actually pretty good.

While there were a lot of different presentations and events planned on Friday night, Saturday and Sunday morning for the Parent Weekend, we kind of set our own course. Our goals were to see Jack, enjoy Georgetown and Washington D.C. and participate in a few of the planned events.

After the tailgate, we stopped at the bookstore and bought a little more Georgetown swag. At this point, we finally caught up with Jack, visited for a bit and made plans for the evening. 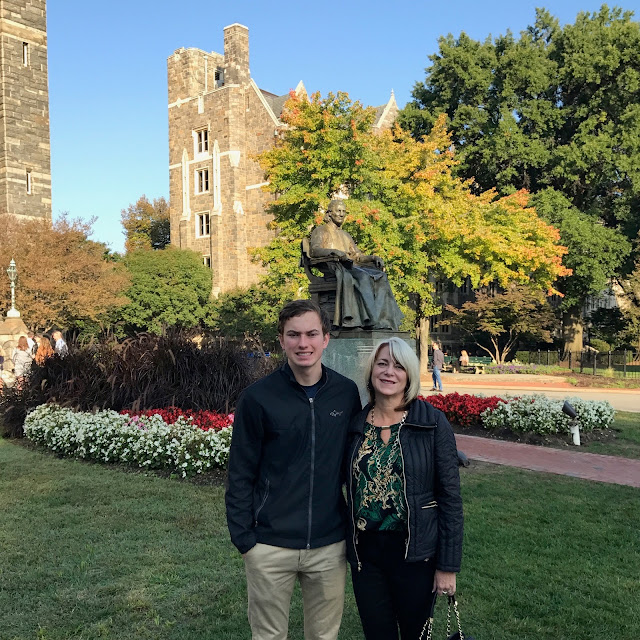 Leaving the campus, Sharon and I wandered through Georgetown. Sharon stopped at a couple of stores...

To get away from the crowds on M Steet as we headed back towards the hotel, we walked on N Street. At one point, Sharon stopped and admired a house for sale. Looking it up on her realtor app, the house turned out to be known as the Jacqueline Kennedy house. Jackie Kennedy lived there for a while after JFK was assassinated. The asking price was $8.9 million!?!

We made another stop at ENO. We have stopped here twice before: once last summer during the college tour and then again during the move-in weekend. From there, we walked back to the hotel.

Jack eventually walked to the hotel and joined us in the room. We visited for awhile and then headed to dinner. Sharon had made a reservation at i Ricchi. This restaurant features authentic Tuscan and regional Italian cuisine. We had a very nice dinner and a very relaxed visit with Jack.

We had calamari and scallops as starters and then split the risotto special of the day. For entrees, I had Cavatelli Neri (squid ink shells), Jack had Taglierini and Sharon had lamb chops.

The three of us walked back to the hotel. From there, Jack continued back to school, while Sharon and I crashed watching the end of the Cubs versus the Dodgers in the first game of NLCS.