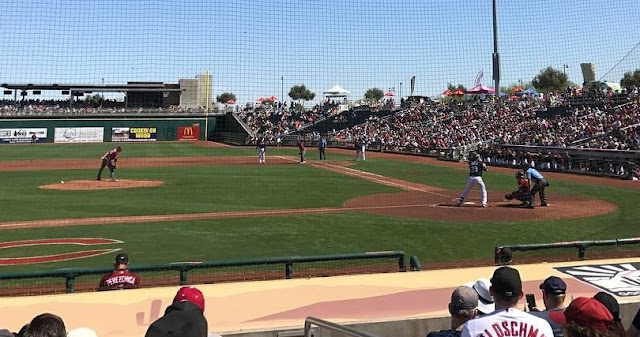 Up early, Tomasin and I grabbed a bite to eat at the hotel. He packed up and I took him to the airport about 8:15 am for a 9:45 am flight from Phoenix to Burbank to Oakland. On the way back to the hotel, I made a quick stop at the Rosson House.

Back at the hotel, I ran about 4.3 miles on the treadmill. I miss having a chance to run with Wallen... There are some cool places to run around Phoenix.

Once I got packed up and cleaned up, I picked up Snipes and Keith at their hotel. We headed to the house that Wallens were renting. We hung out and watched more NCAA basketball.

Eventually, we headed to Goodyear. The game for the day was the Indians and the Diamondbacks. The Diamondbacks scored 2 runs in the top of the ninth to tie the game; the game ended with the score 4 to 4. I have only seen one other tie during Spring Training. Gregor Blanco lead off and played centerfield for the Diamondbacks. He spent the last five years playing for the Giants.

After the game, we headed back to the Wallens' rental. Snipes, Keith and I were ahead of the other cars so we stopped and picked up some more stuff for dinner.

Snipes and Keith caught a Lyft to the airport about 6:30 pm for a 8:00 pm flight. I eventually took off about 8:00 pm for a 10:00 pm Southwest flight. I landed back in Sacramento about 11:45 pm and was home in bed by 12:45 am. The only odd thing about the trip home was that they were only running one small train from the concourse back to the terminal. There were two or three flights worth of people trying to get into the train!
By Heringer at 3/19/2017 11:59:00 PM