Sharon and I haven't taken a domestic red eye since we went to Charlest0n in March of 2015. Although I am not sure that I ever really slept, the flight went very fast. We were on the ground at JFK before 6:30 am. We collected our luggage and caught a taxi into Manhattan. It was about an hour cab ride.

Getting to the hotel a little after 8 am, we were pleasantly surprised to find that they had a room ready for us. We are spending three nights at the Parker New York. We booked this hotel as part of a jetBlue vacation package.

After getting settled in the room, we asked the concierge for a breakfast recommendation. She steered us to Sarabeth's [GARDEN OMELETTE - peas, zucchini, mushrooms, cheddar and SPINACH & GOAT CHEESE OMELETTE]. We were both underwhelm by the food.

Exploring the area a little, we eventually headed back to the room. We napped for a little bit waiting for Jack to arrive. He caught a 7:50 am train from Union Station in Washington DC. Jack got to Union Station just before 11:00 am. Catching an Uber, he got to the hotel about 11:20 am.

The plan for afternoon was to take the Circle Line Best of New York Cruise. Leaving from Pier 83, this cruise goes all the way around Manhattan Island. We all enjoyed the cruise. We got some great view of the Statue of Liberty. I took this cruise almost twenty years ago when Sharon and I were in New York city in June of 1998. I need to find the pictures from that trip. 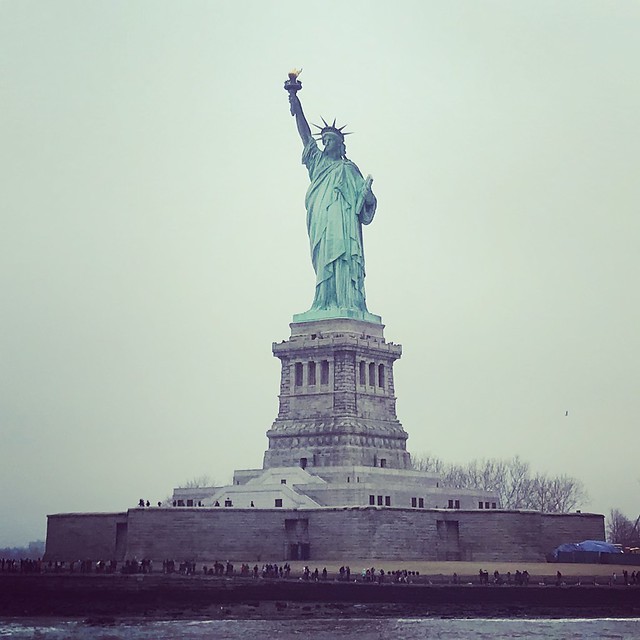 After the cruise, we headed to Buvette in West Village for an early dinner. The restaurant is owned by a girl [Jodi Williams] that Sharon went to high school with. We had a very nice dinner. We started with an assortment of charcuterie. I had a mussels special, Jack had a lobster pot pie and Sharon had a hamburger.