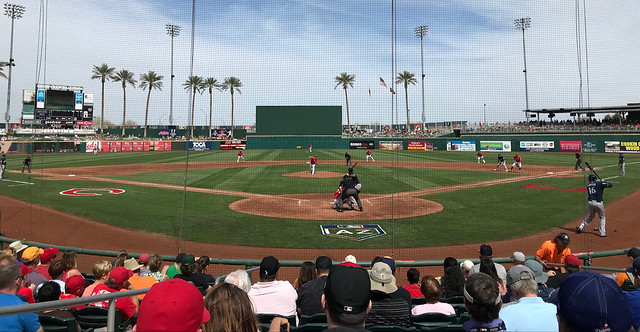 Up at 4:30 am, I was out of the house at 5:30 am. I caught a 7:30 am Southwest Flight from Sacramento to Phoenix. Snipes made a last minute decision to come to Spring Training and was on the same flight. Boarding with A28, I loaded from the rear on the plane and was able to get an exit row aisle. I saved a seat for Snipes.

We were on the ground about 9:20 am. Drew flew from Burbank and was on the ground in Phoenix a little ahead of us. Connecting up, we caught the bus to the rental car terminal. After a couple of years using Enterprise, I have gone back to Hertz. I love Hertz Gold... We ended up hanging out and waiting for David Tomasin.

I made a small tactical error, with Tomasin's flight running about 30 minutes late, we should have stayed in the main terminal for a while. Eventually, we got the car and scooped Tomasin up at Alaska just before 11 am.

We headed to the Hampton Inn to connect up with the rest of the group. Drew and I are actually staying at the Marriott Residence Inn Phoenix Airport. This is the same place that I stayed last year with Tomasin.

The game for the day was the Reds versus Brewers at Goodyear. It was a wild game. The Brewers outscored the Reds by the score of 16 to 13.

The group was a little smaller this year. It included Wallen and Jill, Tomasin and David, Marcus and two of this friends (Brandon and Aaron), Doug Moore and Bob, Gary and Maria Lindsay, Snipes, Vic, Drew and I. We have had years where the group has been twice as big!

After the game, we had dinner at Carrabba's Italian Grill (spaghetti and sausage).

We finished the night playing pool at Philly Sports Bar. Snipes and I were playing as a team. We got a chance to watch most of the Virginia versus UMBC NCAA Basketball Game. UMBC won the game by the score of 74 to 54. It was the first time in tournament history that a #16 seed had beaten a #1 seed. Virginia was actually the overall #1 seed. Drew and I headed to the hotel to check in and crash a little after 11 pm.
By Heringer at 3/16/2018 11:59:00 PM