Roberts’ legacy lives on in the lives she touched, her cultural contributions and how she shaped curriculum at UCLA 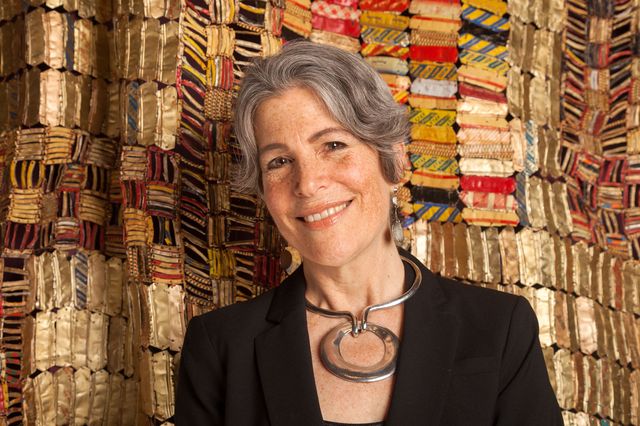 Roberts advocated for women’s health through her work in UCLA’s world arts and cultures/dance department and its commitment to arts activism and global health.

Mary “Polly” Nooter Roberts, UCLA professor of world arts and cultures/dance, died peacefully in her sleep at home on Tuesday, Sept. 11. She was 59, and had been living with stage four metastatic breast cancer for more than eight years.

Roberts was trained as an art historian and became one of the world’s foremost scholars of African arts. She focused her research in the Democratic Republic of the Congo, where she undertook long-term dissertation research among Luba peoples, and in Senegal, where she conducted field research on the arts of a local Sufi movement called the Mouride Way.

Roberts studied the philosophical underpinnings of African visual and performance-based arts and was celebrated for her sensitive and innovative translation of cultural experience into museum exhibitions. She authored or co-authored 15 books; more than 100 scholarly articles published in noted books, academic journals, and online; countless brief entries in exhibition catalogues and encyclopedias. She also presented hundreds of keynotes, panel presentations and museum talks. Through courses like “Curating Cultures,” “World Arts/Local Lives,” and “Arts of Memory,” she brought her wealth of experience to UCLA undergraduate and graduate students.

Her influence was deeply felt in the UCLA School of the Arts and Architecture. Roberts served as a mentor to a great many students interested in arts theories and practices, inspiring them to question their own identities even as they explored arts of diverse cultures throughout the world. Through her museum work Roberts also reached out to many communities, and in 2017, she was awarded the Dai Sensei/Master Teacher Award of the Ethnic Arts Council of Los Angeles. As the award statement read, through Roberts’ “remarkable teaching and speaking skills… the more we learn the more excited we become; the more we seek the more you give.”

These same abilities led to Roberts being awarded the lifetime Leadership Award of the Arts Council of the African Studies Association in 2017 as the most significant recognition in the academic field of African art studies. In 2007, she was decorated as a Knight of the Order of Arts and Letters by the Republic of France for her promotion of French and Francophone cultures and arts.

“A brilliant scholar, beloved teacher, colleague, wife and mother, Polly brightened so many of our lives with her brilliant mind, luminous spirit, unyielding optimism and boundless generosity,” said Brett Steele, dean of the UCLA School of the Arts and Architecture in an email to the school community.

“Polly exuded physical, intellectual and spiritual strength, both before and during her illness. In fact, she rejected the ‘battle’ metaphor for living with cancer,” said Dan Froot, chair of the world arts and cultures/dance department. “Instead, she insisted that it opened up unimagined perspectives for her, and new pathways for sharing her passions, inquiries and discoveries with students, audiences, readers, museum-goers, colleagues, friends and loved ones.”

Embodying the notion that knowledge and wisdom should be shared, Roberts was scheduled to be among the speakers for UCLA Arts’ “10 Questions” series — a hybrid academic course and public event series that brings together leading minds from across the university to discuss fundamental questions.

Though born in the United States, Roberts spent her childhood in Uruguay and Liberia as the family moved with her father’s posting in the foreign service. Roberts mother was a former artist and scholar of the arts of Africa, who worked at the National Museum of African Art.

After receiving her bachelor’s degree from Scripps College and her graduate degrees in art history from Columbia University, Roberts worked for a decade as senior curator at the Museum for African Art in New York City. Her major exhibitions included “Secrecy: African Art that Conceals and Reveals” and “Memory: Luba Art and the Making of History,” which was awarded the College Art Association’s Alfred Barr Award for Outstanding Museum Scholarship.

In summer 1999, Roberts moved to Los Angeles to serve as deputy director and chief curator of the Fowler Museum at UCLA, a position she held through 2008. She curated or oversaw many important exhibitions, including: “Body Politics: The Female Image in Luba Art and the Sculpture of Alison Saar”; “Inscribing Meaning: Writing and Graphic Systems in African Art”; and “Continental Rifts: Contemporary Time-Based Works of Africa.”

“A Saint in the City: Sufi Arts of Urban Senegal,” funded by the National Endowment for the Humanities and co-curated with her spouse, Allen F. Roberts, also a professor of world arts and cultures/dance, opened at the Fowler in 2003 and traveled to five other American museums through 2008. The New York Times hailed the exhibition as one of the year’s 10 best on any theme in any U.S. museum, and the accompanying book won the two most prestigious prizes in African studies.

After shifting from her appointment at the Fowler to become a professor, Roberts was named consulting curator of African arts at the Los Angeles County Museum of Art. She helped found a new gallery for African arts at LACMA, brought several immensely important African sculptures into LACMA’s collections, and she curated important exhibitions. These included “Shaping Power: Luba Masterworks from the Royal Museum for Central Africa,” “Senses of Time: Video and Film-Based Works from Africa,” which was seen at three museums, and “The Inner Eye: Vision and Transcendence in African Arts.” She was planning “Performing the Extraordinary: Monumental Masquerades of Africa” for a LACMA opening in 2020.

Over these last eight years, Roberts’ passions for learning and teaching were extended to living with metastatic breast cancer. As she often said, her new circumstances, as dire and daunting as they most certainly were, permitted her to gain new insights that she shared with her UCLA students. Roberts worked closely with other women living with metastatic breast cancer to create large seminars sponsored by the Komen Foundation, that disseminate information about health care resources and breakthroughs, while urging that — like her — they never lose hope.

Roberts is survived by her parents, her husband Al Roberts; and their three children: Avery, her husband James, and their sons Zane and Felix; Seth and his wife Molly; and Sid; and four siblings and their families.
By Heringer at 9/17/2018 11:59:00 PM