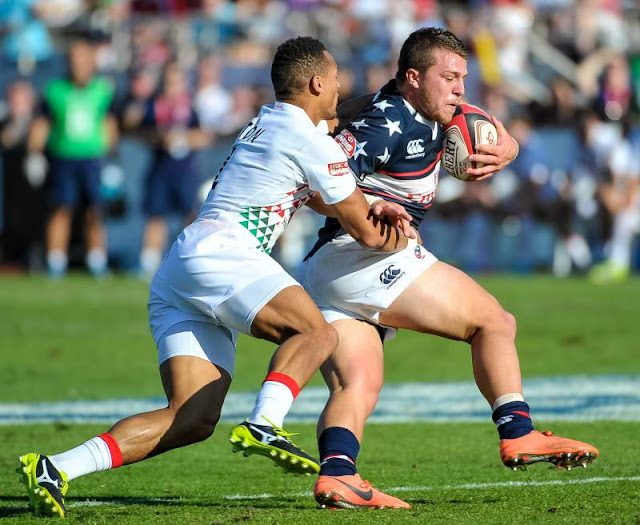 One of the biggest sporting events in the world is coming to the Bay Area this weekend. It starts Friday and runs through Sunday. And no, it isn’t the Giants-A’s rematch at the Oakland Coliseum, though we’re all looking forward to seeing Lou Trivino and Alen Hanson face off in a pressure situation.

No, while the A’s are hosting the Bay Bridge Series, the Giants’ park will be reconfigured for a very different sport. A beefier sport. A rougher and more physical sport. And by the standards of the world stage, a more popular one.

“This is gonna be a huge weekend for rugby in America,” U.S. player Stephen Tomasin told me over the phone on Tuesday. “It’s gonna be on NBC Sports, so it’s gonna be nationally televised. And they’re expecting over 100,000 people through the gates over the three days.”

Rugby, like cricket and Formula 1 racing and even soccer to some extent, is one of those sports that exist on the other side of a cultural divide. While places like Fiji and New Zealand elevate rugby to a near-religious experience, Americans mostly arch an eyebrow and look on suspiciously.


I’m not here to talk you into following the Rugby World Cup. It’s probably too late for that and, anyway, I’m not so steeped in the game myself. But I think it’s cool when major sporting events come to Northern California, and this qualifies. Like the soccer World Cup, the rugby version occurs just once every four years, and this is the first time the United States has hosted. The top 24 men’s national teams and 16 women’s national teams will be here.

The selection of AT&T Park was not random. The Bay Area is a hotbed of rugby. Four of the 12 players on the Team USA roster are from within two or three hours of San Francisco. That includes Tomasin, who grew up in Santa Rosa and was a football star at Cardinal Newman High School.

Rugby is exotica, related just closely enough to American football to reveal its eccentricities — like the protracted pushing matches of the scrum and the airborne players of the line-outs. And even if you have watched some rugby, you may not have seen this version. The sport is generally divided into two forms, 15-a-side and seven-a-side.

Rugby 15s is the older, more revered version. But the biggest rugby event in the world, the competition at the Summer Olympics, is a seven-man event. And so is the second-biggest gig in the world: The World Cup.

With fewer players on the field, rugby sevens is a faster, more free-flowing and higher-scoring game. The games are crazy short, with seven-minute halves. “Which makes it very cutthroat. If you get down, it makes it hard to come back, and vice versa,” Tomasin said.

He noted that USA Rugby equipped its players with little square GPS units that they wear on their backs. Data generated by the technology shows that players run anywhere between 1,400 and 2,000 meters per game. That’s a lot in 14 minutes of action, especially when you consider that no one is moving much during the scrums. It’s a good fit for someone like Tomasin, whose 198 pounds of fast-twitch muscle do not make him one of the larger players in a sport dominated by the thick.

Tomasin took an interest in rugby in high school, gained some attention while playing at San Diego State, narrowly missed making the U.S. Olympic rugby squad two years ago at the tender age of 21 and has since become a mainstay of the Eagles, as the American team is known. He has never been a demonstrative athlete, but he’s pretty fired up for this World Cup.

“As soon as they announced (the venue), it became a big goal of mine to get to this point,” Tomasin said. “It’s hard to explain how much it means for it to be at home. I have so many people coming that wouldn’t be able to watch us play if it wasn’t. So it would be special if it was anywhere, but having it here, just an hour from my hometown, is about as good as it gets, really.”

The national team trains in San Diego. And yes, Tomasin can make a living at rugby. He isn’t getting rich, but the sport pays his bills.

Now 23, Tomasin remains the youngest player on the Eagles. But he isn’t the least experienced. He has played in 22 tournaments with Team USA, and has started many of those.

Tomasin tried out for the 2016 Olympic team as a halfback, but now plays hooker. It’s a forward position. He is responsible for a lot of cleanup tackling on defense. On the attack, he is involved in all the set pieces like scrums and line-outs.

“So my job is to kind of playmake within the forwards and let the other two, the big fellas, do the hard running and the line running,” Tomasin said. “Then I try to finish off what they start.”

If the United States isn’t considered a member of rugby royalty, the Eagles are nonetheless a highly competitive team. Perry Baker was the World Rugby Men’s Sevens Player of the Year in 2017, and fellow wing Carlin Isles was this season’s top try-scorer. Team USA enters the World Cup as the No. 5 seed. It will receive a first-round bye, then play the winner of Wales-Zimbabwe at about 9:30 p.m. Friday. The Americans got their first-ever world sevens win at Las Vegas in early March.

Tomasin did not play in that one. He was nursing a bone bruise that knocked him out of three tournaments after he banged knees with another player. He says he’ll be fully healthy for the games at AT&T.

Everyone talks about rugby’s growth in the U.S., but it has yet to break out as a viable professional sport. Those associated with the game are hoping that hosting the World Cup will rev up the momentum a little.

Guys like Tomasin are convinced that America can fall in love with rugby, just as he has since cutting his teeth in that 2016 Olympic camp.

“I’ve gotten to kind of be immersed in it since then, and it’s totally amped up my passion for the game,” he said. “Because now I’ve gotten to see every tournament in the world. I’ve gotten to play a lot of minutes with this team. So before, I liked it a lot, I guess I’d say. And now I love it a lot more than I did then.”