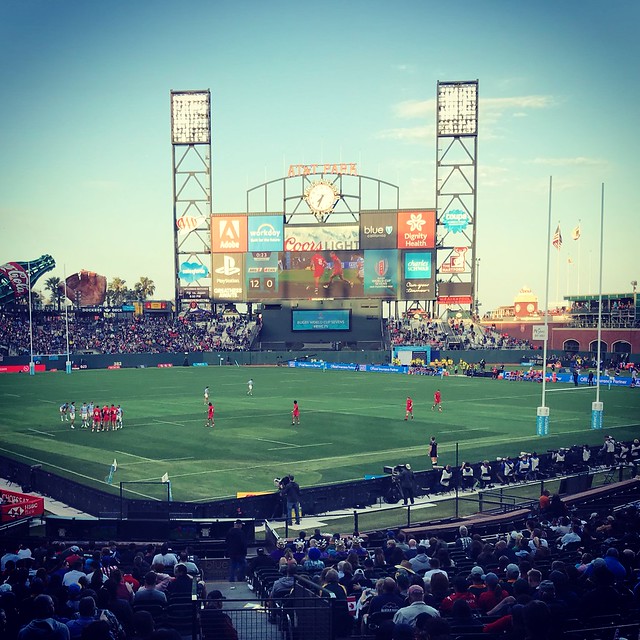 Heading to the airport early, I had a sandwich in the Gateway Bar at the Sacramento Airport. Wallen's flight arrived about 11:50 am. After a quick adult beverage, we headed to Davis to pick up Snipes and Keith. From there, we headed into San Francisco. The plan for the long weekend was to watch lots of rugby; we will be attending the Rugby World Cup Sevens at AT&T Park on Friday, Saturday and Sunday.

The traffic into the city wasn't too bad. Wallen spent about half the trip on a work call. We got the Marriott Marquis about 2:40 pm. Snipes and Keith took an Uber to their hotel. After getting checked in, Wallen and I trekked to the Rambler to connect with Tomasin and Julie. They were staying nearby at the Club Donatello. We ended up with a fairly large group, including David and Mikey and a couple of their friends as well as the Snipes.

From there, we walked towards AT&T Park. We stopped and had dinner at Umami Burgers SOMA. I had a Manly Burger. It was a short walk from the restaurant to the park.

USA played the last match of the night. They played Wales and won by the score of 35 to 0. Stephen Tomasin played about half of the second half.