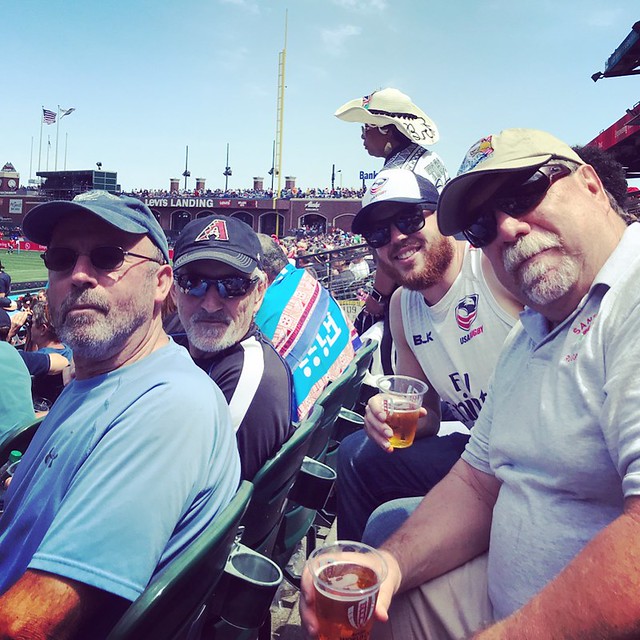 In spite of the late night, I was up and moving fairly early. With Wallen still sleeping, I headed down to the concierge lounge for a quick breakfast. When I wandered back up to the room, Wallen was still out. I decided to head to the health club. I ran four miles in 50 minutes.

Back in the room, I got cleaned up. Wallen and I headed to the Donatello to catch up with the Tomasins. Tomasin, Juile, Pat, Kathy and I ended up having breakfast at the Café Mason. Both Wallen and I had huevos rancheros. Snipes and Keith eventually showed up and had breakfast there also.

From there, we walked to AT&T Park. The men's fixtures started in the afternoon with United States playing England as the last day of the afternoon. To me, the most surprising thing of the weekend was the Fiji fans. When Fiji played Argentina on Saturday, the place was packed. The Fiji fans were going wild and there were Fiji flags everywhere. Wallen made the comment that the entire country must have been there! It was incredible.

At the end of the day, USA lost to England in overtime by the score of 24 to 19. Rugby sevens is a game of ball possession. USA failed to control the ball twice when they were receiving the kick-off. Both times led to quick scores by England. At the beginning of the overtime, England kicked off to USA, USA failed to control the ball, and England scored also immediately to end the game. Stephen Tomasin didn't started, but played most of the second half.

After the game, Wallen and I stopped at the Marriott Marquis. We had one expensive drink in The View Lounge before heading to dinner.

Julie made reservations for 16 at the Stinking Rose for 7:15 pm. The group included Hunter and Yuli and Swedberg and Deb. Swedberg and Deb were on the '11 Rugby Wor1d Cup trip to New Zealand. I had an excellent fresh black linguine with shellfish in a zesty tomato sauce.