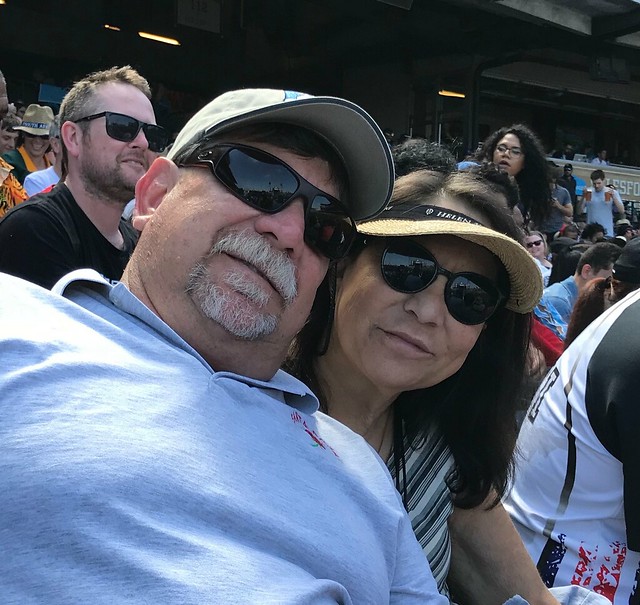 Sleeping a little later, Wallen and I ended up watching the British Open. Tiger was leading in the final round on the eleventh before making a series of mistakes. Six years ago, I bet Rod Renteria that Tiger wouldn't win another major before our boys graduated from high school. He still owes me for that bet...

Wallen and I packed up our bags and dropped them with the bell captain. We wandered down to the Cafe Mason. We met Tomasin and Snipes for breakfast.

After breakfast, we stopped back at the room for a few minutes. Snipes and Keith met us at the Marriott. They dropped their bags with the bell captain and then we all walked to AT&T Park.

The USA played Scotland at 11:56 am. They won by the score of 28 to 0. Stephen Tomasin played the whole game.

With USA playing their second game of the day at 5:00 pm, it was a long afternoon. We saw lots of rugby; over the course of the three days, I think that there was 84 mens and women's games! At one point, I did a walkabout and explored the stadium.

The USA played in the 5th/6th game against Argentina. Unfortunately, they got their head handed to them. They lost by the score of 33 to 7. Stephen Tomasin played the whole game. He actually scored two points on the drop kick after the USA's only goal. USA finished 6th out of the 24 teams in the tournament. We had three Argentines sitting right in front of us.

We decided not to stay for the final game. New Zealand beat England by the score of 33 to 12.

Wallen, Snipes, Keith and I walked back to the hotel, collected our bags, got the car and headed for home. I dropped the three of them in Davis. I rolled home about 8:15 pm.