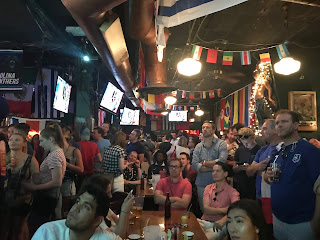 Sleeping late, Sharon eventually connected with Jack. They headed to the Lucky Bar near Dupont Circle to watch the World Cup final. The place was packed. They ended up having breakfast and standing for the whole game. In an entertaining game, France beat Croatia by the score of 4 to 2. Jack and I watched France lose the World Cup final to Italy in Paris in 2006!

Heading back to Georgetown, they spend some time shopping, including the Nike store. At one point, they wandered up to the bar at the top of the Graham Hotel. Sharon and I discovered this spot when we helped Jack move in for his sophomore year.

In the late afternoon, Sharon and Jack walked up to the Safeway on Wisconsin. They stocked up on some groceries for Jack.

They finished the day wandering the mall from the War World II Memorial to the Lincoln Memorial to the Korean War Memorial. They caught a cab back to the hotel.
By Heringer at 7/15/2018 11:59:00 PM