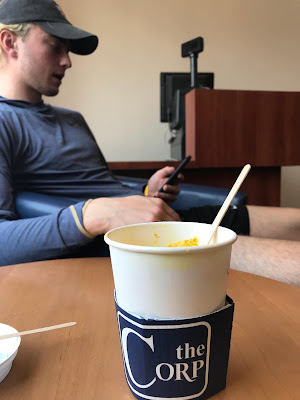 Sharon and Jack spent the morning on campus visiting a couple of The Corp businesses where Jack is working this summer, including Vital Vittles and Uncommon Grounds. I am jealous; I haven't had a chance to visit Uncommons Grounds!

They had an early lunch at The Tombs. The three of us ate lunch there over two years ago when we were visiting Georgetown for the GAAP weekend!

After lunch, Sharon wandered back to the hotel and checked out. She was originally planning to do some more shopping in Georgetown, but decided that it was just too hot.

She took off early for the airport via an Uber. She boarded a 5:15 pm nonstop United flight from Dulles to Sacramento. The flight was a little delayed due to thunderstorms. It eventually took off about 5:35 pm. She was back in Sacramento at 8:14 pm. Upgrading her seat in the morning, it was an easy flight and she was one of the first people off the plane. Her luggage came off quickly and we were home a little after 9 pm.