With my job change in the fall of 2016, I haven't been traveling quite as much. Taking advantage of Sharon and Janie being in Wichita, I decided to spend the afternoon tracking down a number of historical markers. I ended up visiting eight markers, including: First Tehama County Courthouse [#183]; Hooker Oak [#313]; Old Suspension Bridge [#314]; Tidwell's Bar [#330]; Last Yahi Indian [#809]; Posted Water Notice Site [#831]; Chico Forestry Station and Nursery [#840.2], and; Mother Orange Tree of Butte County [#1043]. 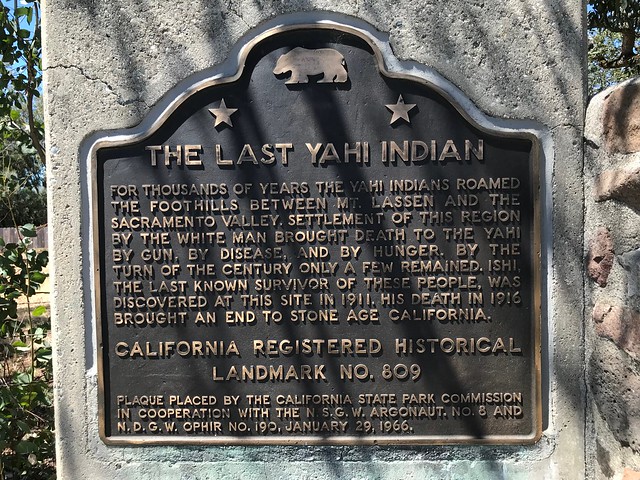 Ishi, a Yahi Yana Indian, was the last of his people. Prior to European contact, the Yana population numbered approximately 3,000. In 1865 Ishi and his family were the victims of the Three Knolls Massacre, from which approximately 30 Yahi survived. The remaining Yahi escaped but were forced into hiding after cattlemen killed about half of the survivors. Eventually all of Ishi's companions died, and he was discovered by a group of butchers in their corral at Oroville, August 29, 1911. Alfred L. Kroeber and T. T. Waterman, anthropologists at the University of California, Berkeley, brought Ishi to San Francisco where he helped them reconstruct Yahi culture. He identified material items and showed how they were made. Ishi's death in 1916 marked the end of an era in California. 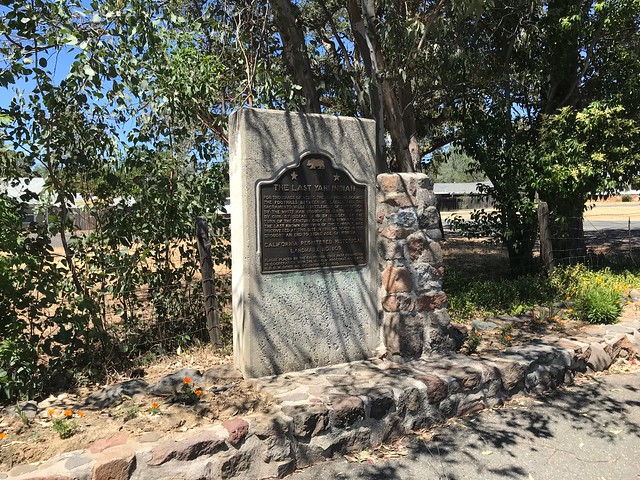