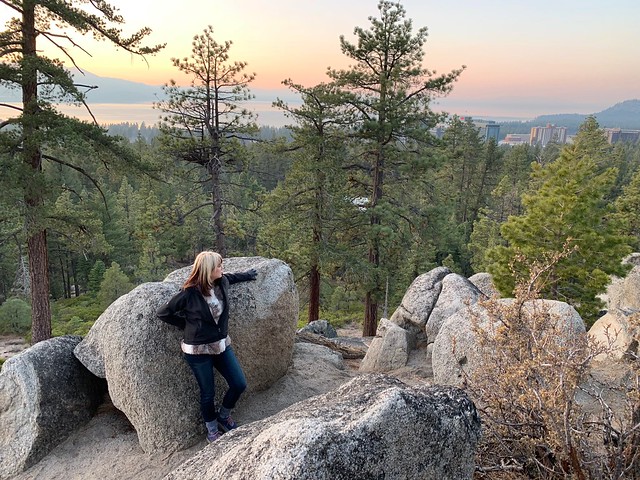 With the air very unhealthy in the valley due to the Camp Fire, Sharon and I decided to get out of town for the weekend. Dropping Tiber at the kennel, we headed out of town before 10 am. We were in South Shore at the hotel just after noon. We are staying one night at the Marriott Grand Residence Club. Jack and I stayed here one night in 2005 when we were tracing the Pony Express Trail. The room was actually ready when we got there.

After dropping our stuff in the room, we headed out to find somewhere for lunch. The area was a mad house. Eventually, we decided to take the tram up to Heavenly. We stopped at the observation deck. Unfortunately, the view wasn't as spectacular as it could have been due to the smoke.

We continued up the tram to the top. We had planned to have lunch there. It turns out that Tamarack Lodge only has a cafeteria; this was not quite what Sharon had in mind. I was surprised at the number of people skiing. 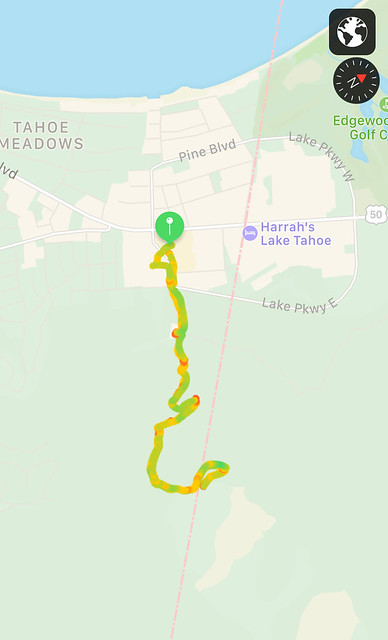 Heading back down, we tried to find somewhere to eat. Everywhere had an hour wait for a table. We finally found a Hawaiian restaurant--Kalani's--off the beat path that wasn't packed. We sat at the bar and split a Kalua Pork Quesadilla, the Lobster Bisque and a Heavenly Salad. Sharon would later describe the food as horrible.

After lunch, we hiked up through the Van Sickle Bi-State Park. We followed the Barn Trail up to the Cal/Nev Loop Trail. We covered just over three miles. I really enjoyed the hike. I wish that we had got started earlier in the day. We got back to the hotel just as it was getting dark.

Sharon was very impressed with the lodge. We talked about coming back, staying here and playing golf with the Sanborns or the Gainsleys.
By Heringer at 11/17/2018 11:59:00 PM