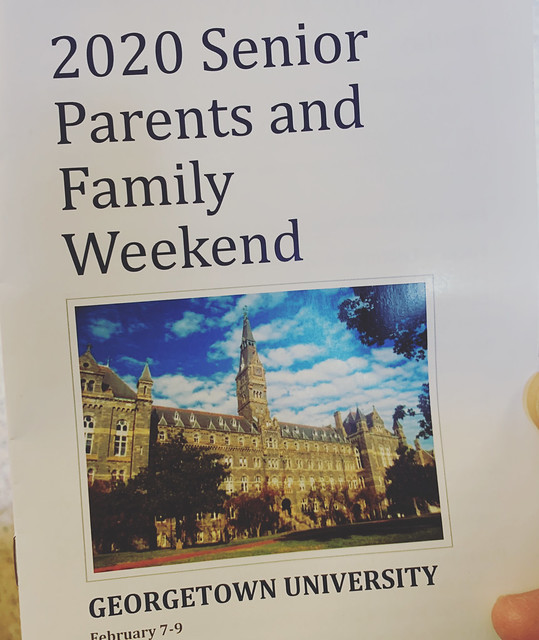 Setting an alarm, I got up a little after 7 am and ran four miles on the treadmill, while Sharon slept in. Afterwards, I got cleaned up and met Nooter for coffee at Bourbon Coffee on L Street. It was pouring rain. We had a nice visit. Intellectually, I have always enjoyed Rob's company.

Swinging back by the Marriott, I grabbed Sharon. It had stopped raining so we walked into Georgetown. We had a leisurely lunch in the lounge at the Bourbon Steakhouse in the Four Seasons. We both had the hamburger special.

After lunch, we walked to campus and picked up our packet for the Senior Parent Weekend. We attended a lecture by Professor Charles Skuba titled Globalization 2020 and U.S. International Trade Policy. We went to a lecture by same professor at the GAAP weekend almost four years ago. Jack has a class with him this semester that will be spending spring break in France and Belgium.

Leaving the lecture, we caught up with a Jesuit Heritage Walking Tour with Father Matthew Carnes. The tour focused on the university's Jesuit history and tradition.

From there, we walked up to the Leavy Center. We ran into Jack just as he was leaving work. Jack and Sharon spent some time getting the cap and gown that he will need for graduation.

We reconnected with Jack at the Healy Family Center for the President's Welcome Reception. This was the kick off for the weekend with a welcoming address by President DeGiola.

Sharon, Jack and I finished the day with a dinner at Ristorante La Perla. Sharon and I had walked by this restaurant when we were in Georgetown last November. After splitting an antipasti, I had LASAGNA PARTENOPEA [Fresh seafood lasagna stuffed with crab, lobster, scallops, shrimp & prepared with a champagne sauce], Jack had GNOCCHI ALLA NAPOLETANA [homemade potato dumplings with marinara sautéed with parmesan and shredded mozzarella cheese] and Sharon had a rabbit special. During dinner, we had a nice talk about Jack's future.