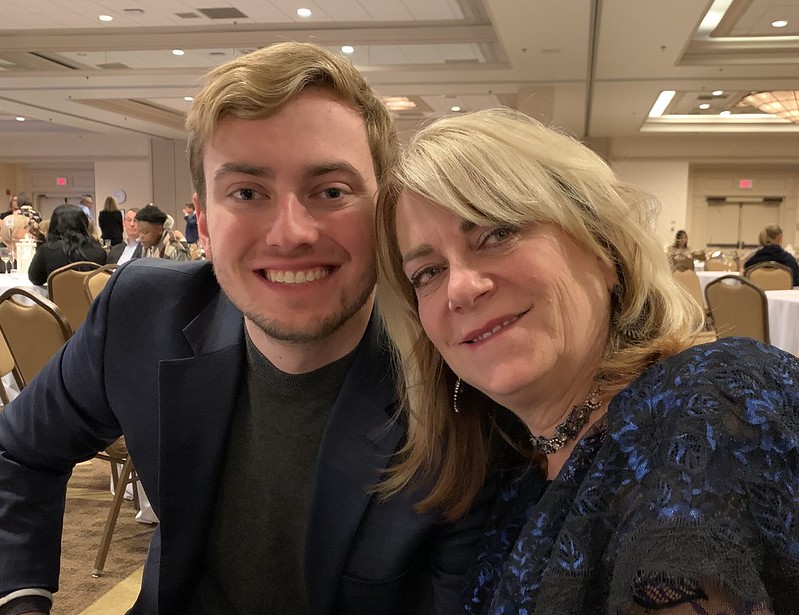 For the first morning on this trip, Sharon and I had breakfast in the concierge lounge. After packing up the room, we got an Uber to the Georgetown campus. We met Jack for Mass at Gaston Hall.

From the Mass, we walked to the Healy Family Student Center for a light farewell breakfast in the social room. Afterwards, we walked back to his apartment and then up to the Safeway on Wisconsin. Sharon and Jack spent an hour successfully buying groceries. The three of us were just barely able to carry all of the groceries out of the store and catch an Uber back to Jack's apartment.

We walked to the tombs and then Booeymonger before deciding to say goodbye. Sharon and I caught another Uber back to the hotel. Checking our bags with the bellman, we had a late lunch at Cafe Deluxe across the street from the Marriott. We both had Ahi Tuna Nicosia [olives, tomatoes, green beans, egg, crispy capers, roasted fingerlings, herb vinaigrette]. We ate here once before at the end of our long 2017 East Coast Fall trip.

Sharon and I caught an Uber to Dulles about 2:45 pm. It was only a 40 minute trip on a Sunday afternoon.

We caught a 5:45 pm United flight nonstop from Dulles to Sacramento. We had a nice exit row in a newer 737-800. Although long at almost 6 hours, it was an uneventful flight. We were disappointed that we couldn't watch the Oscars.

It is hard for me to believe that Jack is going to graduate from Georgetown in three months! Between now and then, Jack has two major trips planned. During the semester break, he is going to France and Belgium with Professor Skuba's class. At Easter, Jack is going to Miami and Jamaica with Sophia and her family.
By Heringer at 2/09/2020 11:59:00 PM