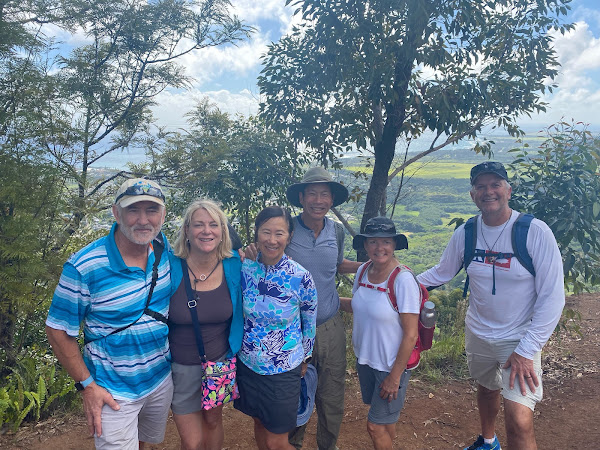 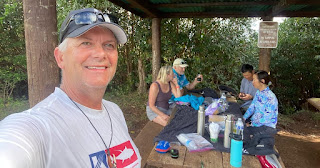 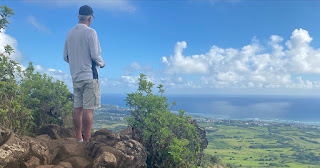 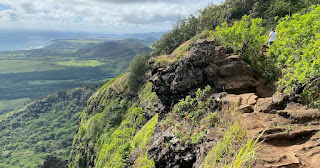 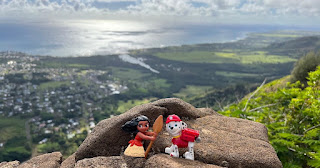 After two days of golf, Holly, Van, Kevin, Donna, Sharon and I switched gears and decided to hike on Wednesday. The Gainsleys suggested the east Sleeping Giant trail. Taking two cars, we got an early start in order to make sure that we could get a parking spot. We ended up hiking just over three miles with almost a thousand foot gain in elevation. The total time on the trail was just over two hours and twenty minutes. A map is here.

When we got back to the condo in the afternoon, we headed to the pool at the Marriott's Kaua'i Beach Club again! Sharon and I spilt some fish tacos at the pool bar.

After a short nap in the afternoon, the six of us went to an early dinner at Hualani's Restaurant at the Timbers Kaua'i. Although it was walking distance from the condo, the Gainsleys didn't know that it was there. We split an interesting appetizer: Signature Pupu Whole Fried ["Hawaiian Ehu", lime aloha shoyu, chili]. I had SESAME CRUSTED AHI [Local Yellowfin Tuna, Shiitake Jus, Jasmine Rice]. This was a very good meal; it will probably be the best meal of the trip.