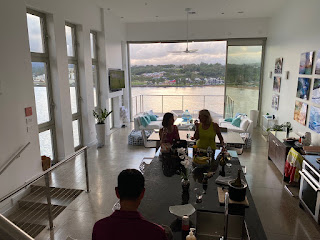 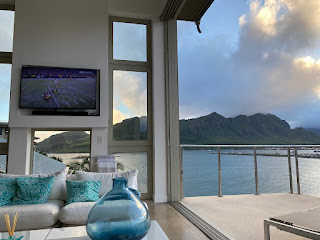 Donna, Kevin, Holly, Van, Sharon and I started the day with a long morning walk. We walked along The Ocean Course at Hokuala to the Ninini Point Lighthouse. On the way back, we wandered through an old abandoned golf course near the airport. In total, we walked more than five miles. It rained off and on during the walk.

While the Gainsleys walked to the airport to pick up a car, Holly, Van, Sharon and I had a late breakfast at the condo. Afterwards, Sharon and I went shopping at Safeway.

In the early afternoon, the four of us drove to Wailua Falls. The double waterfall is known for rainbows and its place in the "Fantasy Island" opening credits. Sharon, Jack and I visited the falls when we were on Kauai in 2013.

On the way back, we stopped at the Wailua Golf Course and hit balls on the range. I felt good with my short and medium range irons, but not so much with my woods. It is going to be interesting to see how my knee holds up when we play on Monday and Tuesday. I twisted it badly the last time I played golf in December.

We got back to the condo just in time for the start of the San Francisco 49ers versus Green Bay Packers NFC playoff game. It was a very odd game. Essentially on the strength of their special teams play, the 49ers won the game by the score of 13 to 10.