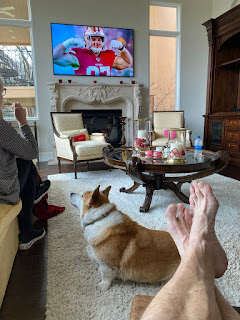 I rarely, if ever, sit and watch a whole football game real time. As part of a low-key birthday weekend, Jack, Sharon and I watched the San Francisco 49ers versus Dallas Cowboys National Football League wild card game. During the week, I tried to get Rod to bet me on the game, but was unsuccessful.

The 49ers held on to win the game by the score of 23 to 17. The 49ers won the game with a dominant defense, a strong rushing attack and a myriad Cowboys mistakes.

For the 49ers, Jimmy Garoppolo was 16 for 25 for 172 yards with no touchdowns and one interception. Elijah Mitchell was the leading rusher with 96 yards on 27 carries. Deebo Samuel added 72 yards on 10 carries! Brandon Aiyuk was the leading receiver with 66 yards on five receptions.