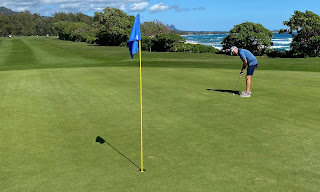 This is destined to be known as the vacation with lots of golf. For the third out of four days, Holly, Van, Donna, Kevin and I played golf. When we hit balls at the range on Saturday, Holly made two tee times at the Wailua Manicipal Golf Course for Thursday.

We started the day with breakfast at the Noka Grill. This was the only morning that we didn't make breakfast at the condo. I had a breakfast sandwich [egg, cheese, bacon, spam, lettuce and tomato on a brioche bun].

Mixing things up, we split into two threesomes. I rode single with Kevin and Donna, while Sharon and Holly rode together with Van as a single.

Although I didn't score as well as Monday I had a much better time than I did on Tuesday. The course played pretty long. Although I was striking the ball pretty well at the beginning, my short game continues to be a struggle. I parred the par four fifth hole.

It was a long round. With a couple of slow groups in front of us, it took more than four hours and forty minutes to play eighteen. It was also the warmest day of the trip so far. After about thirteen holes, my concentration started to wander and I was ready to be done. I ended up carding a 118. The scorecard is here.

After golf, we headed to the Lava Lava Beach Club for a late dinner. Sharon and I had eaten at this restaurant on the Big Island. I had STRAIGHT UP BURGER [Angus Chuck, Lettuce, Tomato, Onion, Cheddar]. Sharon was disappointed that they didn't have a fish sandwich.

Back at the condo, Donna, Kevin, Sharon and I wandered over to Hualani's Restaurant at the Timbers Kaua'i for a nightcap. Holly and Van spent the time packing. They are leaving on Friday.

Holly, Sharon and I finished the night watching the first episode of the Gilded Age. The series has a number of references from the Vanderbilt book that both Sharon and I read.
By Heringer at 1/27/2022 11:59:00 PM