Up early, I took the Holly and Van to the airport about 6:15 am. After two plus weeks on Oahu, Maui and Kauai, they are flying home.

After I got back from the airport, I walked down to the ABC Store for some eggs and water. Sharon and I had a leisurely breakfast in the condo.

The Gainsleys were changing rooms. Checking out by 10 am, they left their luggage with the bell stand and walked up to the condo.

The plan for the day was a hike in Poipu. Looking in AllTrails, I suggested that we hike the Maha'ulepu Heritage Trail from Shipwreck Beach to Punahoa Point. This was a hike that the Gainsleys hadn't done before.

We ended up hiking about four miles in about two hours. There was some great views of the ocean along the bluffs. Part of the hike walks along the Poipu Bay Golf Course. We saw whale spouts and a sea turtle. A map is here. 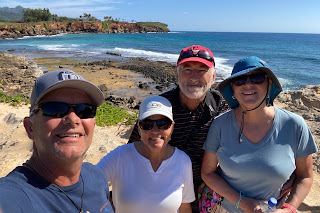 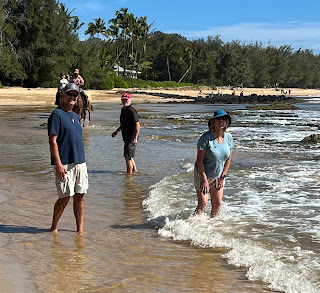 Afterwards, the four of us had lunch at the Captain's Bar at the Grand Hyatt. I had a Ahi poke bowl, while Sharon had fish tacos..

Heading back to Lihue, the Gainsleys went back to the Marriott to switch rooms. Sharon and I took a nap. Afterwards, we started packing up the condo.

Eventually, Sharon and I wandered over to the Marriott to check out the Gainsley's room. From there, the four of us headed to Hualani's Restaurant at the Timbers Kaua'i. We had dinner at the bar. Sharon and I spilt a Kale Caesar, Kalbi Lamb and Jasmine Rice.