We played golf with the Kevin and Donna and Holly and Van at Ancil Hoffman. With Fair Oaks closed for the California International Marathon, we met everyone in the parking lot by the Jack in the Box and carried clubs across the street to our cars.

Like a couple of weeks ago when we played with Holly and Van at Lincoln Hills, I was hitting the ball very well on the driving range. I am continuing to focus on keeping my head and shoulders still. Unlike that time, I felt like I was able to carry some of it over to the course.

We started off with two threesomes. I was with the Gainselys and Sharon was with the Wongs. Sharon rode with Holly all day. At the par three fifth hole, we joined up and played as a sixsome until the clubhouse. We did the same thing at the back nine; we started as two threesomes and then joined up after a couple of holes.

In an odd turn of events, I twisted my knee badly teeing off on the 12th. I went down like I had been shot. As a result, the last six holes were a little bit of a blur. Nevertheless, I feel like I played pretty well. I shot a fairly honestly scored 110. 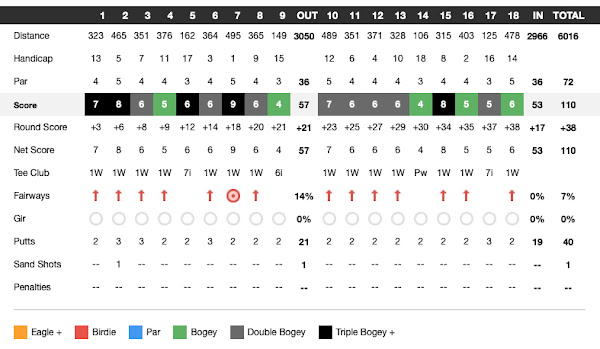 After golf, we headed back to our house. I barbecued a flank steak. We had a nice meal of steak, rice and a slaw that Holly made.