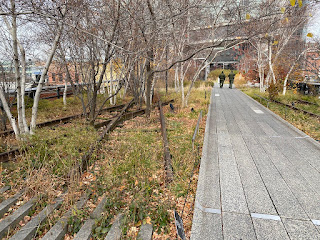 With a group of nine of us for most of the day [Larkin, Tomasin, Snipes, Wallen, Nooter, Jim, Vic, Max and I], it was hard to get everyone moving in the same direction.

Moving slowly after a very late night, Larkin and I joined the bulk of the group for breakfast at the hotel. Afterwards, we caught a ferry from Port Imperial to the Midtown Edgewater Landing at 39th Street. I was interested in walking the High Line and pushed the group in that direction.

We ended up walking the whole trail, about 1 1/2 miles in forty minutes. A map is here. I spent most of the walk talking with Nooter about his new job with the International Biochar Initiative.

With Nooter needing to make a call for work, the group settled into Best Burger on West Little 12th Street in the meat packing district for beers and snacks. Afterwards, we continued south to the 9/11 Memorial. Sharon, Kevin, Donna and I visited the memorial in 2013. Tickets for the 9/11 Museum which wasn't open when I was there before were sold out for the day.

Jumping on the subway, we headed to Times Square. Snipes had scouted a historic dive bar called Rudy's. We hung out there for a while and then started towards an early dinner. Walking with Nooter, we had a meandering talk about life.

We had a very large group for dinner at the Old Homestead Steakhouse. Adding Max's wife, son and his wife, daugther (Tracey) and her husband (Nate) and nephew, I think that group swelled to fifteen for dinner. I had a SHERRY BROTHERS NEW YORK PRIME SIRLOIN.

After dinner, we walked back to the ferry and headed to the hotel. Like the first night, a group ended the night in Nooter's room talking and listening to music. Larkin and I wandered back to our room and crashed about midnight.
By Heringer at 12/10/2021 11:59:00 PM