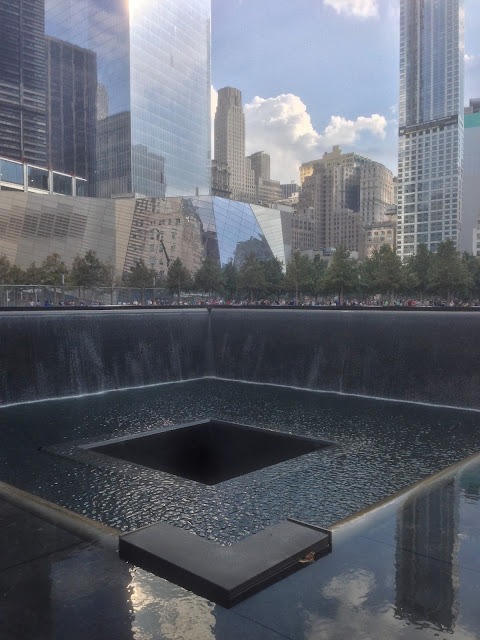 The original plan for the morning was a tour of the Statue of Liberty. I bought tickets in July! Unfortunately, the government shutdown impacted the National Parks, including the Statue of Liberty. Meeting in the lobby at 9 am, we wandered through Grand Central Station and then took the subway to Battery Park. We walked to the edge of Battery Park and got a hazy view of the statue.

From there, we walked up Broadway to Trinity Church. This parish dates from 1697. The third and current Trinity Church on the site was finished in 1846 and at the time its 281-foot spire and cross was the highest point in New York.

We walked down Wall Street past the New York Stock Exchange. The four of us ended up having an early leisurely lunch at Delmonico's. I think that Sharon and I may have had lunch there when we were in New York in 1998.

After lunch, we headed to the St. Paul's Chapel. This is one of the oldest buildings in New York and dates from 1766. The chapel is in the shadow of the World Trade Center site and is a de facto Memorial to 9/11. George Washington, along with members of the United States Congress, worshipped at St. Paul's Chapel on his Inauguration Day, on April 30, 1789. Washington also attended services at St. Paul's during the two years New York City was the country's capital.

We walked through the 9/11 Preview site and then headed to the main site. After a quick stop across the street, we spent some time touring the 9/11 Memorial. It is an unusual memorial.

Afterwards, we jumped back on the subway and headed to the MoMA. From our trip in 2009, I had a vague memory that Friday evenings were free. We got a free ticket and did a quick tour of the museum. The museum was packed. I have been reading the Life of Picasso and focused on looking for his paintings and sculptures.

Getting cleaned up at the hotel, we walked to Fabio Piccolo Fiore for an Italian dinner. After dinner, we stopped at the Waldorf-Astoria for a drink in the Bull and Bear. The bartender started chatting us up and recommended a couple of other nightspots. We ended up going to Mimi's Italian Restaurant and Piano Bar. The piano player [Chicken Delicious] was a character. It is rumored that there may be video of Kevin and I singing You've Lost That Loving Feeling. By the time we got back to the hotel and down for bed, it was after 1:30 am...
By Heringer at 10/04/2013 11:59:00 PM