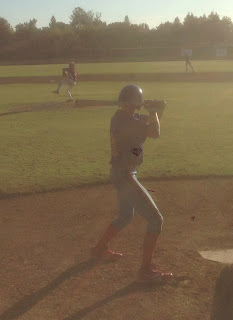 Two of Jack's teammates from the Outlaws and Gunners--Niko and Josh--played for Laguna Creek. Niko was the starting pitcher and then played centerfield. Leading off, Niko was 1 for 2 with a single and a walk. Josh had one at-bat, but didn't play in the field.

Jack is batting with Niko pitching in the picture to the right.

Leading off for the Cardinals, Jack was 1 for 3 with a double and a run scored. In his first at-bat, Jack ran the count to 3 and 2. He fouled off two pitches and then crushed a fly ball over the right fielder's head for a double. Jack went to third on a sacrifice bunt and scored on a single up the middle. He fell behind 0 and 2 in his second plate appearance. Jack fouled off two more pitches and then protecting the plate flipped a pitch into right center for an out. The runner on second tagged and advanced to third. In his third at-bat, he hit a 1 and 1 pitch for a fly ball down the first base line for an out.

In the field, Jack played centerfield for the whole game. This was unusual for fall ball. Typically, they have had the outfielders rotating every inning. He had one put-out on a fly ball to centerfield.

Behind strong pitching from Marco [who played with Jack on the Walbeck team] and Cosca, Jesuit defeated Laguna Creek by the score of 3 to 1.