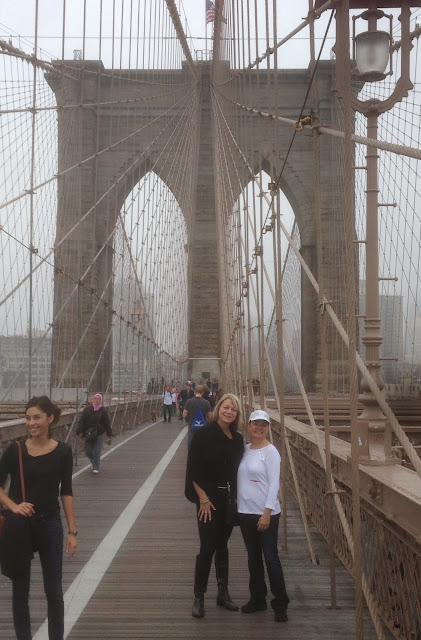 Another late morning start... We met the Gainsleys in the lobby of the hotel about 10 am. As a side note, I had some interesting adventures getting coffee on both Saturday and Sunday morning. Each morning, I tried to find a Starbucks that was not absolutely packed. The lines were so long on Saturday morning that I ended up giving up and heading back to the room. Both mornings, I was surprised that how many people were out and about. I had expected it to be quieter on Sunday morning, but the city was hopping.

The plan for the day was to have lunch with Morgan and her boyfriend Beau. We took the subway south to the Brooklyn Bridge and City Hall stop. We spent some time exploring the area around City Hall.

We then headed across the Brooklyn Bridge. Although it was overcast and misy, it was a great walk with some interesting views. We walked down into Brooklyn to Grimaldi's Pizzeria. Kevin found the restaurant on a list of things to do in New York City. Morgan and Beau met us there. We had a great visit with them. It was very nice to see Morgan and catch up.

After lunch, we walked back across the Brooklyn Bridge. We took the subway north and wandered around the area near NYU. From there, we took a cab to Gramercy Tavern. We had a drink there before catching the subway back to the hotel. Sharon ended up coming back to the tavern on Tuesday afternoon for lunch.

We finished the day with dinner at Oceana. Sharon and I split a Shrimp and Oyster Paella. With a very early start on Monday morning, it was the first night that we actually got to bed before midnight on the trip.
By Heringer at 10/06/2013 11:59:00 PM