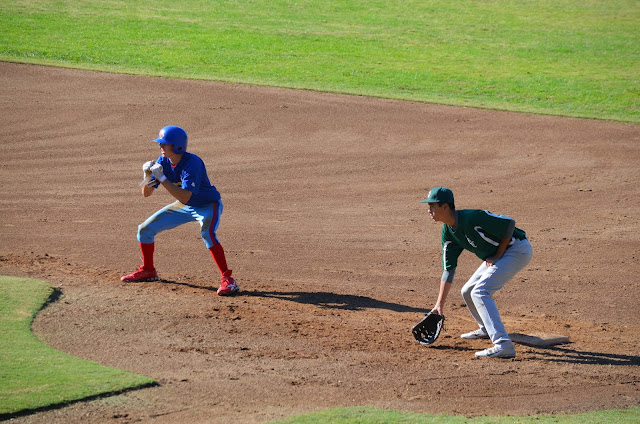 Leading off in both games, Jack was 2 for 7 with a stolen base, run scored and a RBI. Essentially, he was 1 for 4 in the first game and 1 for 3 in the second game. In his first at-bat, Jack looked at two called strikes, fouled off a pitch and then hit a single up the middle. He stole second, went to third on a sacrifice bunt and scored on a fielder's choice. Jack was lucky; on a ball grounded to the left side and Jack breaking for the plate, the catcher couldn't handle the throw from the third baseman. Jack grounded a 3 and 1 pitch up the middle in his second plate appearance. He drove in a run and was thrown out at first. In his third plate appearance, Jack chopped a 1 and 0 pitch down the third base line and was thrown out at first. Jack hit a 1 and 0 pitch for a long fly ball to centerfield for out in his fourth plate appearance. In his fifth at-bat, he hit a 2 and 0 pitch for line drive right at the centerfielder for an out. Jack hit a 1 and 1 pitch for a blooper behind first base in sixth plate appearance. The first baseman made a nice catch going backwards. In his seventh at-bat, he hit a 1 and 1 pitch through the left side for a single. He moved to second on a walk, to third on a sacrifice bunt, but ended the inning there when Bryce struck out and Alex flied out to center.

In the field, Jack rotated between all three outfield positions. He had two put-outs. In right field, Jack made a nice running catch on a foul ball hit down the first base line. In left field, he made a great play. On a ball that was crushed over his head, Jack made a fantastic running catch. He got a great jump on the ball, but I was surprised he was able to haul it in! Jack also had an amazing effort on a ball hit foul down the first base line. He was short on a diving attempt, but I couldn't believe how much ground he covered.

I continue to be extremely pleased with how fall ball has gotten. Jack looks very comfortable in the group of mostly juniors and seniors. He has gotten a chance to get to know the varsity coaches. More importantly, I haven't seen Jack look overmatched at the plate against any of the pitching.

In a footnote to how much Jack has started to focus on baseball, he asked me to set up the tee and the net in the garage after dinner. After spending more than six hours on the diamond playing today, Jack went into the garage and hit off the tee for over an hour... 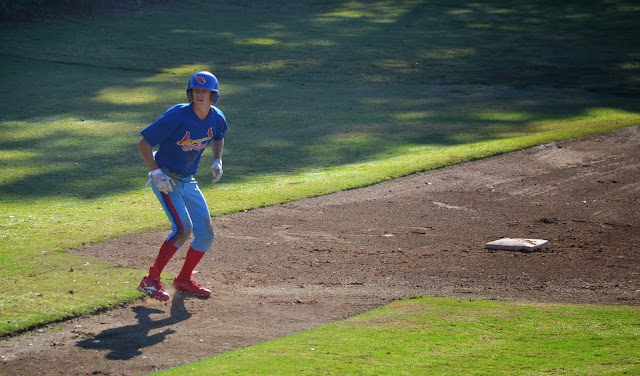