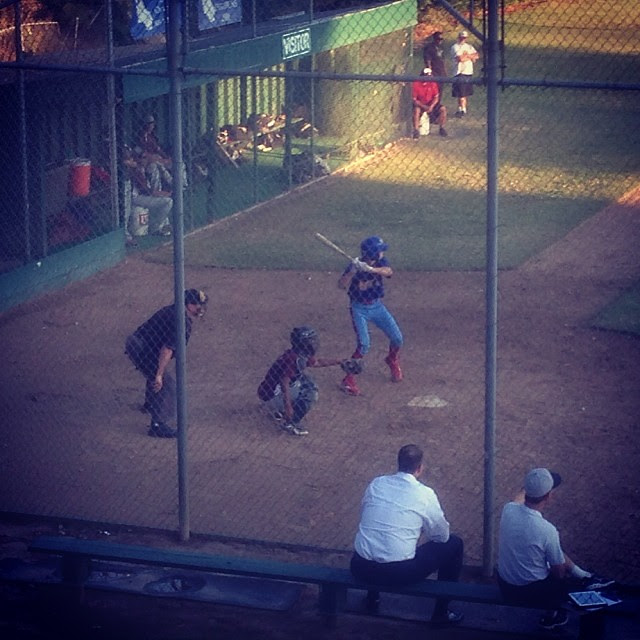 Jack played in his fifth game for the Jesuit Fall Ball Cardinals on Thursday night. They played against Laguna Creek at Jesuit High School. Laguna Creek beat up Jesuit in an earlier fall ball game, but this was a much different Jesuit squad! Unlike the team that Laguna Creek faced earlier, this team was mostly seniors with a couple of juniors and Jack as the only sophomore. Niko was playing for Laguna Creek; he is catching in the picture.

Leading off, Jack had a great game. He was 4 for 4 with two walks, two RBIs and a run scored. They have some interesting rules in fall ball. Jack essentially had four plates appearances in the bottom of the first inning. In his first at-bat, he walked. They had someone run for him. Jack then walked again. They had someone else run for him. The coaches then asked him to bunt. Jack bunted down the third base line for a single. Having someone run for him, they coaches brought him back to the on deck circle. In his fourth plate appearance in the bottom of the first, Jack hit a long fly ball to the warning track in right field to drive in a run. I got to the game in the third inning. Jack hit a 2 and 1 pitch for a line drive to right field in his fifth plate appearance to drive in a run. He went to second on the throw to plate and scored on a hit by the next batter. I loved Jack's sixth at-bat. With a count of 1 and 2, he reached out and poked a low outside pitch down the first line for a single.

In the field, Jack rotated between right, left and center fields. He had no assists and no put-outs.

When I asked Jack the score after the game, he said that it was a lot to zero. Laguna Creek only managed two hits: a lead-off single by Niko and a fly ball to the right field warning track over Jack's head late in the game. When I expressed surprise at the score, Jack said "well, they didn't have Josh pitching."

When I got to the game, Marco [a junior] was pitching for Jesuit. He looked very good. Jack played with Marco on the Walbeck team over the summer.

After the game, Coach P showed the team video of two at-bats. One of the at-bats that he showed was Jack's next to last plate appearance. Telling the story in the car, Jack said "all those lessons paid off."