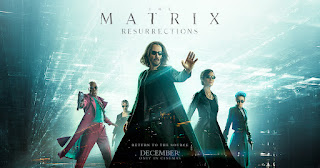 Thursday night, with Sharon at a St. Mary grade school get together, Jack and I watched The Matrix Resurrections on HBOMax. While I have seen The Matrix fairly recently, I have not seen either of the two sequels. In preparation for this movie release, Jack watched all three of the original films again in the last couple of weeks.

The movie is a science fiction action film produced, co-written, and directed by Lana Wachowski. It is the sequel to The Matrix Revolutions (2003) and the fourth installment in The Matrix film franchise. Keanu Reeves, Carrie-Anne Moss, Lambert Wilson, and Jada Pinkett Smith reprise their roles from the previous films.

The film is set sixty years after the events of Revolutions and follows Neo [Reeves]. He lives a seemingly ordinary life as a video game developer troubled with distinguishing dreams from reality. A group of rebels free Neo from an altered Matrix and fight a new enemy that holds Trinity [Moss] captive.

The first twenty minutes of the movie is an interesting twist on the story. Once you get pass this part, the story falls into a pattern visually similar to the first three movies. I give the film a lukewarm thumbs up.
By Heringer at 12/30/2021 11:59:00 PM