A Christmas Day in three parts...

Part One. After Sharon and I walked Tiber, we made a nice breakfast of waffles, bacon and pineapple. Unlike last year, it was just Jack, Sharon and I. The three of us had a leisurely morning opening presents. It was definitely a golf Christmas. Sharon and I both ended up giving each other laser golf rangefinders.

Part Two. In the late morning, we headed to Morgan and Daniel's apartment. Jack, Sharon and I hung out and visited while Daniel worked on putting together the Ikea play kitchen that we got Lee for Christmas. Lee is a wonderful little guy. We are enjoying having them so close. 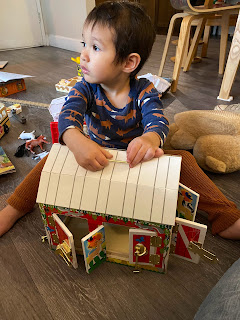 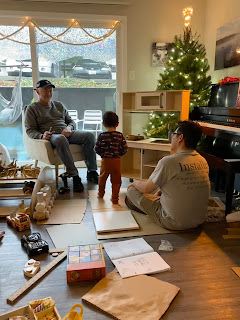 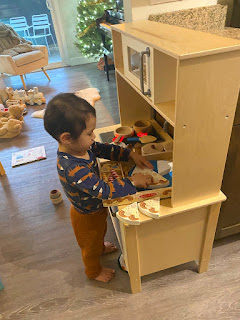 An interlude. Back at house in the afternoon, I wandered out to the jacuzzi by myself. When I retire, I plan to write a book about 1991. Soaking in the hot tub in the rain, I played with some thoughts for the dedication and the opening chapter.

Part Three. Sharon's brother Tom came over in the early afternoon. We spent some time lamenting the drama and politics of Christmas Eve. Sharon made a nice early dinner of individual beef wellingtons, potato souffles and spinach.

Traditionally, we have gone to see a movie on Christmas Day. Since the start of pandemic, we have watched a movie at home. After some debate, we settled on Don't Look Up. More about the movie here.