I got myself overcommitted personally and professionally. Sharon and I got an opportunity to use some tickets to the Warriors versus Kings game at Chase Center on Monday night. I didn't want to turn down the opportunity, but hadn't cleared my work calendar as well as I should have.

Up fairly early, I did some work and tried to sort out my calendar for the next two days. Eventually, Sharon and I wandered down to the Mission Street Pantry and got a continental breakfast using a coupon in lein of the M-Lounge.

After a couple of morning meetings, Drew and Jack rolled up to hotel. The four of us wandered down the block to the SFMoma. We spent a couple of hours exploring the museum including an interesting Joan Mitchell Retrospective.

After lunch, Drew headed back to Oakland. Sharon and Jack crashed in the room. I did a walk about hunting for a series of California Historical Markers. Using the Waymarkly app, I eventually found eight different markers, including: #90 FORT GUNNYBAGS; #88 NIANTIC HOTEL; #462 SITE OF FIRST JEWISH RELIGIOUS SERVICES IN SAN FRANCISCO; #408 SITE OF THE FIRST MEETING OF FREEMASONS HELD IN CALIFORNIA; #453 LUCAS, TURNER & CO. BANK; #192 EL DORADO, PARKER HOUSE, AND DENNISON'S EXCHANGE; #500 EASTERN TERMINUS OF CLAY STREET HILL RAILROAD; and, #119 PORTSMOUTH PLAZA.

Getting cleaned up, Sharon and I caught an Uber to the Chase Center. Jack walked, while Drew and Carmen drove in from Oakland. Sharon and I had dinner in the JP Morgan lounge at the arena. 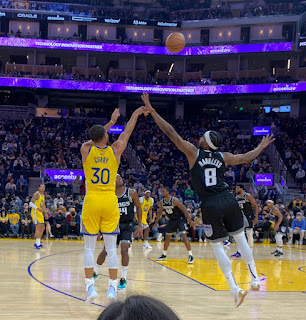 We watched the Sacramento Kings versus Golden State Warriors NBA basketball game. Keeping the score close for most of the game, the Kings were outscored 29 to 19 in the fourth quarter and lost the game by the score of 113 to 98.

The high scorer for the Kings was Tyrese Haliburton. He had 24 points on 8 for 18 from the field, 2 for 4 from three and 6 for 7 from the free throw line. Haliburton had 11 assists. With Fox and Mitchell in the COVID protocols, he played 41 minutes.

The high scorer for the Warriors was Steph Curry. He had 30 points on 13 for 27 from the field, 4 for 12 from three and 0 for 1 from the free throw line. Draymond Green added a triple double with 16 points, 11 rebounds and 10 assists.

I really enjoyed the opportunity to sit on the floor. We were in the second row [seats BB 144 and 145] just to the left of the Warriors bench. Drew got tickets for him, Carmen and Jack in the upper deck.

The Kings now have one win and two losses in games that I have seen in person during the 2021-2022 season.