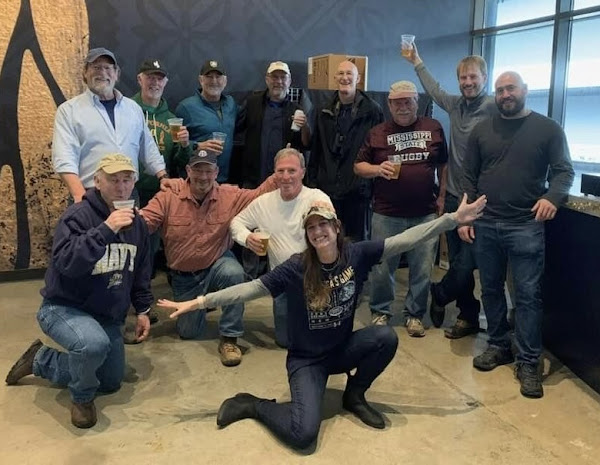 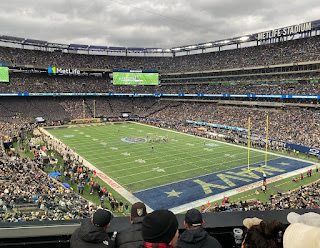 I actually set an alarm for 750 am. Getting up and showered, Larkin and I met the group in the lobby of the hotel for breakfast.

The plan was to head to Metlife Stadium early. Larkin, Nooter, Snipes and I caught an Uber in front of the hotel at 10:55 am. It was about a twenty minute ride. Walking up to the gate, we ran into Max's group.

After some wandering around, we found a defensible space on the first level. We spent a couple of hours there gathering the group and visiting. Getting to our seats, I was surprised to find that Jim and Joy Page were joining us.

It was an enjoyable game. Navy beat Army by the score of 17 to 14. Throwing only six passes, the Navy quarterback rushed for two touchdowns.

Two years ago, it was a mess leaving the game. We ended up walking a long way from the stadium to catch an Uber. Over the course of the day, I looked at the train connections. With Nate leading the way, we fell into a herd of people heading towards the trains. We caught an event train to Secaucus Junction Station. From there, we took a New Jersey Transit train to Penn Central.

Exiting Penn Central, we started looking for an Italian restaurant. Eventually, we stumbled across Trattoria Bianca at the corner of 8th and West 35th streets. I had a Grilled Vegetable Pizza [Mushroom, eggplant, zucchini, onion, chopped tomato, olives, mozzarella cheese and basil] and a Caesar Salad.