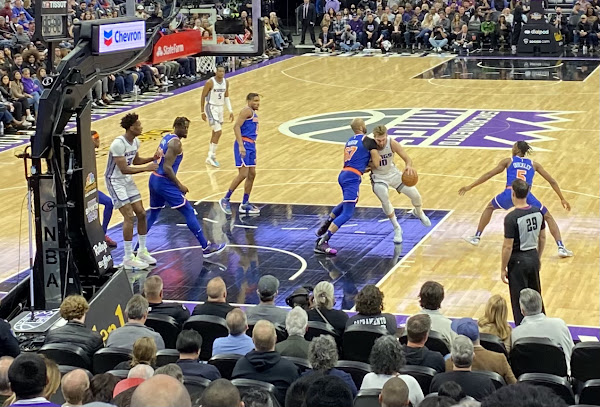 Leading by 20 points in the second quarter, the Kings got blown out in the second half and lost the game by the score of 131 to 115. The Kings were outscored 44 to 24 in the third quarter, but got within 96-94 early in the fourth.

Julius Randle was the high scorer for the Knicks. He scored a career high 46 points on 18 for 31 from the field, 8 for 16 from three and 2 for 2 from the free throw line. Randle had 10 rebounds. RJ Barrett added 29 points.

This is the first game that I have got a chance to see Sabonis in person. Domantas Sabonis had 19 points and 13 rebounds for the Kings before being ejected in the fourth quarter after receiving double technicals.

It was a very discouraging game. The Knicks came into the game having lost 11 of 13. The Kings became just the fourth team in the last 25 seasons to lose a game by 16 or more after leading by 16 or more after the first quarter, joining the Bulls (2019), Timberwolves (2003) and Clippers (2000).

Larkin and I connected with Hunter and one of his veterinarian (Arturo) at half time.