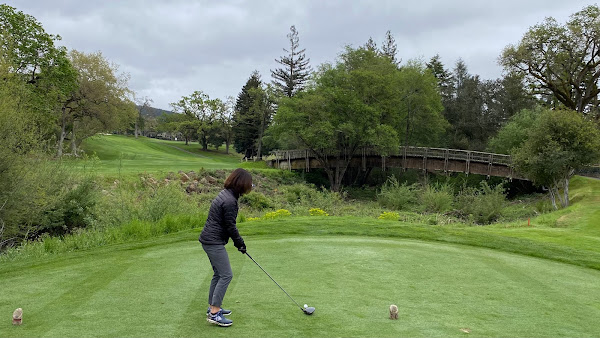 Up early, I grabbed some pantries and oatmeal at the Silverado Market & Bakery. We packed up the room and put our luggage in the car.

After checking out, I picked up a cart and our golf clubs. Hitting a few balls on the range, I was very inconsisent. We had an early 8:40 am tee time on the North Course. There were very few people on the course. I started ok, but struggled on the back nine. My back was brothering me on Tuesday, but felt fine. Unforunately, my right elbow really started to brother me.

I was wildly inconsistent. I had a number of very good long 5 woods and 4 hybrids plus a few great short irons shots. I had an equal number of horrible shots. I really struggled in the wet rough. I ended up shooting slightly better than the previous day with a liberally scored 119. The scorecard is here.

Holly suggested a putting contest. I ended up with 46 putts compared to 42 putts for Sharon. I thought that the greens and the areas around the greens were actually a little easier than the South Course.

After lunch, the four of us headed to Bouchaine Vineyards. Sharon and I have been wine club members there since 2010. It is amazing how much the tasting facilities have expanded since we first came there. It was kind of an odd tasting...

With stops at Burger King and Taco Bell in Carmichael, we were home about 6:45 pm. 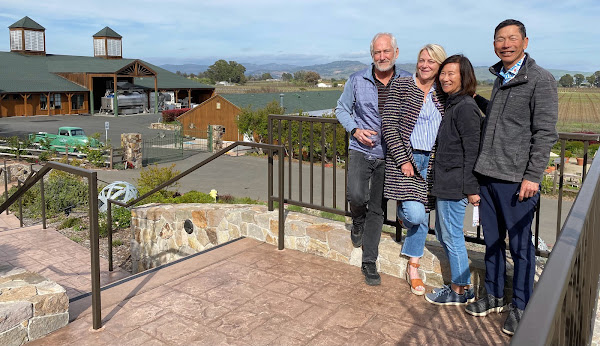