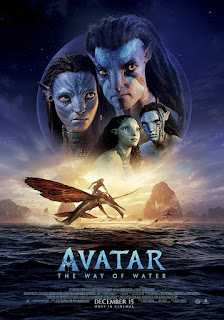 Friday afternoon, Sharon and I saw Avatar: Way of Water at the Palladio Luxe in Folsom. This is part of our annual odyssey to watch the potential Oscar Best Picture candidates. Goldderby.com currently has the film as one of the top ten favorites to win the Best Picture Oscar.

The film received nominations for Best Motion Picture – Drama and Best Director at the 80th Golden Globe Awards. It was named one of the ten best films of 2022 by the National Board of Review and the American Film Institute.

I was surprised at how much Sharon liked the film; she gave it an "8". I enjoyed the film; it is visually amazing. I thought that some of the scenes were a little long and overwrought. Sharon wants to go back and watch the first film.