Although Jack's 6th birthday was almost two weeks ago, with the trip to Florida and the Labor Day weekend, today was really the first opportunity for us to get organized for a larger birthday party. We invited a number of the boys in his class and ended up with a group of eight 6 and 7 year olds.

We got a bouncy house, a balloon person who brought a face painter and a piñata, fed them pizza for lunch, opened presents and had cupcakes. Along the way, the kids played basketball, football, hockey and raced slot cars.

I originally pushed the idea of having the party at the house, rather than at somewhere like a skating rink or Chunky Cheese. Although we managed through it pretty well, this was a mistake. The boys are getting so active and physical that I felt like I needed a striped referee's shirt, a whistle and an electric cattle prod to keep them in line.

There is a photo album from the party at: 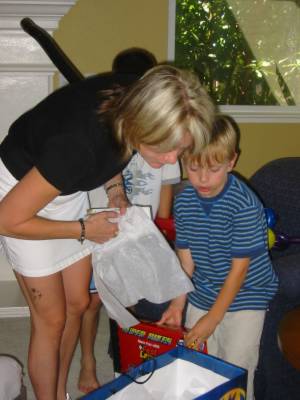 Pictures from Jack's 5th birthday party last year are at: