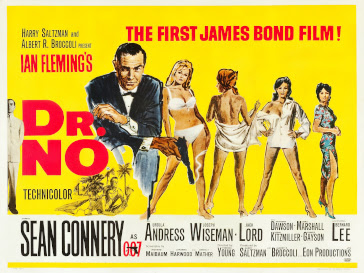 I got Sharon the first James Bond Film, Dr. No, as a stocking stuffer for Christmas. My goal is to watch all 22 of the James Bond films in order over the next two years.

Sharon, Jack and I watched Dr. No on Saturday. It stars Sean Connery as James Bond, Jack Lord as CIA Agent Felix Leiter and Ursula Andress as Honey Ryder. Made in 1962, the movie has a much slower pace than later Bond films without the heavy reliance on special effects. In the film, Dr. No has built a nuclear reactor on Crab Key off of Jamaica to power energy waves to "topple" U.S. rocket launches.
Posted by Heringer at 2/10/2007 11:59:00 PM