Jack played in his first game of the 2007 flag football season. After three years of playing soccer in the fall, this is his first year playing flag football. As I have noted before, Jack has had less and less enthusiasm for soccer so we decide to shift to flag football this year.

In this age group in this league, they allow the coaches on the field to position the players and call the plays. Given that this was the first game of the season, things went pretty slow. I am not sure that either team ran much more than 10 offensive plays in four ten minutes quarters with a running clock.

Jack played very well. In the first quarter, he caught a pass in the left flat, faked by one player and outran everyone the length of the field down the sideline for his team's first touchdown. On the extra point, Jack played quarterback and threw a shovel pass for the conversion. In the second half, he took a handoff at midfield and raced around the right side for his team's second touchdown.

Jack played quarterback for three plays, including the conversion, and was 2 for 3. He had two or three "tackles" on defense, including one where he caught a sweep from behind.

Sharon and I were sitting on the sideline at midfield. When Jack got the pass in the flat and got around the first player, he was coming up the sideline towards us. It was a very surreal scene to see him coming streaking towards us carrying a football with a pack of little kids chasing him. Unfortunately, I did not have either camera ready. Instead, you get a picture of him playing quarterback on the try for the extra point. 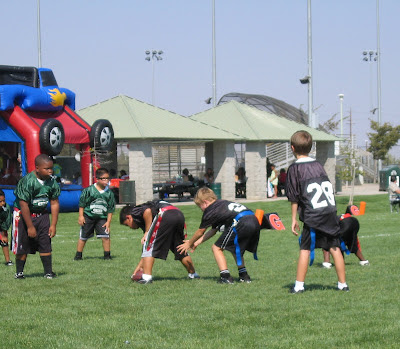