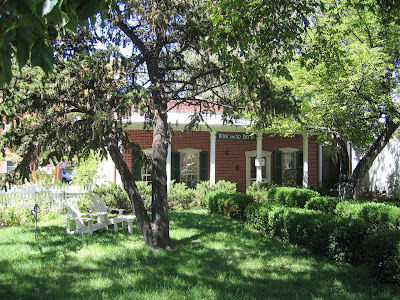 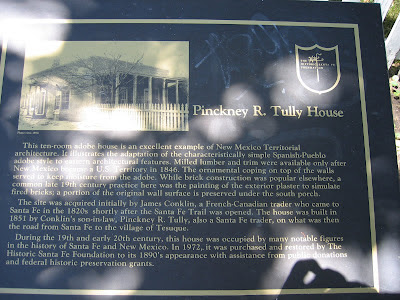 This ten-room house is an excellent example of New Mexico Territorial architecture. It illustrates the adaption of the characteristically simple Spanish-Pueblo adobe style to eastern architectural features. Milled lumber and trim were available only after New Mexico became a U.S. Territory in 1846. The ornamental coping on top of the walls served to keep moisture from the adobe. While brick construction was popular elsewhere, a common late 19th century practice here was the painting of the exterior plaster to simulate fired bricks; a portion of the original wall surface is preserved under the south porch.

The site was acquired initially by James Conklin, a French-Canadian trader who came to Santa Fe in the 1820's shortly after the Santa Fe Trail was opened. The house was built in 1851 by Conklin's son-in-law, Pinckney R. Tully, also a Santa Fe trader, on what was then the road from Santa Fe to the village of Tesuque.

During the 19th and early 20th century, this house was occupied by many notable figures in the history ofSanta Fe and New Mexico. In 1972, it was purchased and restored by The Historic Santa Fe Foundation to its 1980's appearance with assistance from public donations and federal historic preservation grants.

In 2002, the Historic Santa Fe Foundation renamed the Tully House for Oliver P. Hovey, a man whose contemporaries sometimes referred to as Lord Hovey or even the Great Lord Hovey, for his pretentious and extravagant ways. He was not a lord, just as the house he built was not really red brick.