Palace of the Governors

Traveling across Northern New Mexico in August, I kept asking myself one question. What were the Spanish doing here in the 1500's? The Spanish were in New Mexico before Jamestown or Plymouth Rock. I ended up buying a book called the Pueblo Revolt in the museum store at the Palace of the Governors. This book has a good summary and timeline of the Spanish exploration and settlement of the American Southwest. One of my to-dos for the next month is to put together a short post outlining the timeline.

In 1610, Pedro de Peralta, the newly appointed governor of the Spanish territory covering most of the American Southwest, began construction on the Palace of the Governors. In the following years, the Palace changed hands as the territory of New Mexico did, seeing the Pueblo Revolt of 1680, the Spanish reconquest from 1693 to 1694, Mexican independence in 1821, and finally American possession in 1846. 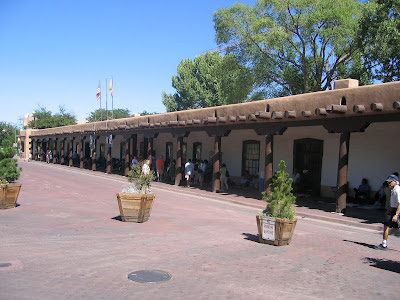