Jack played in his fourth flag footbal game of the 2007 season. His team continues to struggle. Jack is also getting more than a little frustrated. He played quarterback one play and threw an incompletion and threw one other incompletion on a broken half back option. Jack caught one pass and made a nice gain before being forced out of bounds at mid-field. He was wide open with no one covering him for four straight plays and the quarterback threw it in the middle. Jack is upset that he is not getting a chance to catch or run with the ball more. 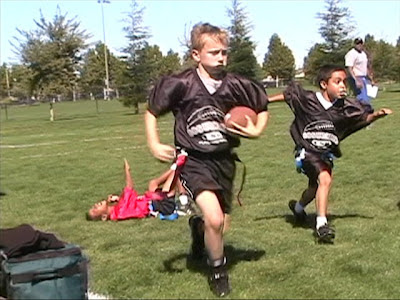