Jack and I went to the UC Davis versus Western Washington Football game. This was the first game at the new Aggie Stadium; it replaces Toomey Field which served as the campus's major athletic venue for 58 years. Jack and I sat in the south end zone on the grass. With temperatures near 100 degrees in the stands and probably 110 to 115 on the field, this was probably the coolest spot in the stadium. One of the things I like about the current configuration of the stadium is that you can walk around the concourse and watch the play on the field. Overall, the new stadium has some great sight lines.

The Aggies lost to the Vikings by a score of 28 to 21. With platooning senior quarterbacks starting the game throwing dying ducks, a freshman running back running for 189 yards but fumbling twice and undersized cornerbacks, the Aggies did not look very good against the Division II Vikings. I think that it is going to be a long season.

We tailgated before the game with a fairly large group, including Hunter and Debbie, Snipes with Keith and a couple of friends, Greg and Dean Chabrier with Matthew, the twins and Greg's parents, Mike Wilson and his youngest son Max, Al Greene and his wife Jeanie, Jay Tyburczy and his wife, the Sockolov's and the Foss's. 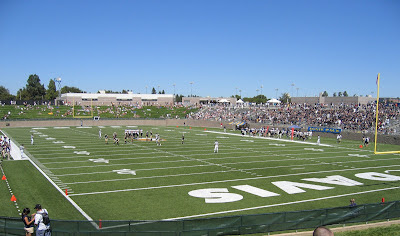