Unlike the playoff game on Tuesday, the team was not hitting. Jack was 1 for 2 with a walk and a RBI. He walked in his first at-bat. He stole second and then stole third. In a double steal (runner on first goes to second and Jack breaks for home), Jack was thrown out at the plate in a very close play. Jack grounded down the third base line in his second plate appearance and was thrown out at first. With the bases loaded and one out, Jack looped one into right center to drive in a run in his third at bat.

Jack played shortstop for five innings. He made probably the best catch of the year. On a ball popped in short left, Jack made a long run and an over the shoulder diving catch. He handled a couple of grounders. He ranged far to his left on one grounder to make a diving stop. Jack made the throw to first from his knees, but the runner was safe on a close play. He fielded one grounder and made the throw to second for a force. Jack had one grounder where he had trouble getting the ball out of his glove and the runner was safe.

In addition to not hitting as a team, the fielding started falling apart as the game wore on. The Padres ended up losing by a score of 15 to 3 in five innings. The Giants will move on to the championship game. 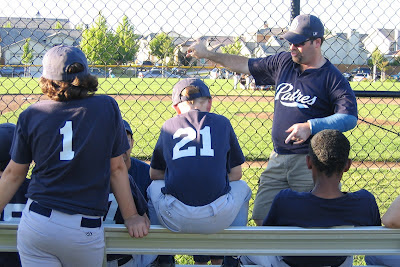