Jack and I spent the Wednesday before Thanksgiving waymarking historical sites in Western Amador County in the rain. This was the eighteenth of twenty-one places that we stopped.

Volcano
California State Historical Landmark #29
See this location on Yahoo Maps in Flickr
See this location on Google Maps
This landmark is located the intersection of Main and Consolation Streets, Volcano, California in Amador County. There are 24 other California State Historical Landmarks in Amador County. The GPS coordinates for the plaque are N 38° 26.552 W 120° 37.893. 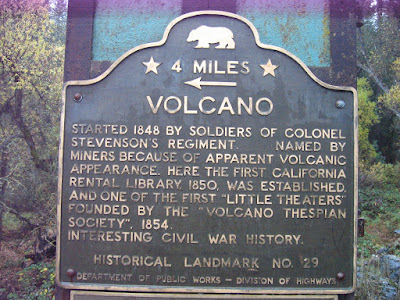 The spot was discovered in 1848 by Colonel Stevenson's men, who mined Soldiers Gulch in 1849. By 1853 the flats and gulches swarmed with men who named them picturesquely. Hydraulic operations, begun in 1855, brought thousands of fortune seekers to form a town of 17 hotels, a library, a theater, and courts of quick justice. During the Civil War, Volcano's gold served the Union - Volcano Blues smuggled the cannon 'Old Abe' in by hearse to quell rebels. 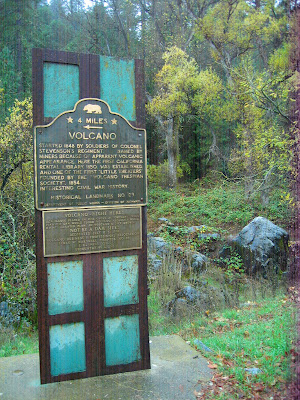