Jack's basketball team played its third game of the season, the championship game of a three day tournament. They played against St. John Vianney at Holy Cross in West Sacramento.

After yesterday's game, I thought that we had seen the biggest kids that we would face in the tournament. I was wrong. St. John Vianney had an even bigger kid. I looked on the web for the school after the game. St. John has one JV team of 5th and 6th graders. Jack's team is made up of all 5th graders.

Jack started the game and played all of the first quarter. It was a strong starting group, combining Jack with Joe, Connor, Jake and Andy. Nevertheless, they seemed out of sync. Struggling offensively and defensively against the big kid in the middle, the Eagles fell behind 11 to 6.

Jack started the third quarter with the same group. They just could not get going and had a number of double dribbles and turnovers. The center for St. John scored 6 straight points, while the Eagles could not manage a basket in the whole third quarter. St. John's led by a score of 20 to 13 at the end of three quarters.

The Eagles scored with 2 seconds left in the game to make the score St. John's 24, Eagles 22. The Eagles pressed on the inbound pass. St. John's tried to make a bounce pass along the baseline to get the ball inbounds. Jake stepped in front of the pass and made a lay-up to tie the score at 24 as the clock expired.

They played a three minute overtime. When the Eagles missed four straight foul shots and St. John's made two foul shots, I thought the game was over. Nevertheless, the Eagles tied the score with another basket. With 2 seconds left in the overtime, Jack made an inbound pass 3/4's the length of the court to Jake who turned and put up a shoot that bounced off the back of the iron.

They played a one minute double overtime. The Eagles scored two points in the overtime to win 28 to 26!

It was wild. After yesterday's game, I would not have believed that the Eagles could play a more exciting, closely fought game.

This was not Jack's best game of the tournament. He was 0 for 2 from the field and 2 for 3 from the free throw line for 2 points. Jack had two rebounds, two steals, one block and only one assist. Late in the game, Jack fought the biggest kid on St. John's for a rebound to create a jump ball and win the ball on the possession arrow. 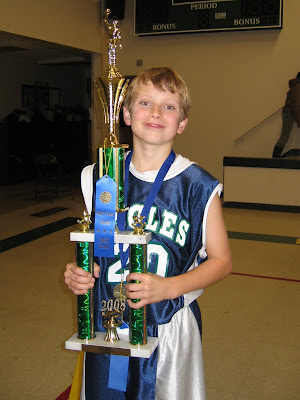 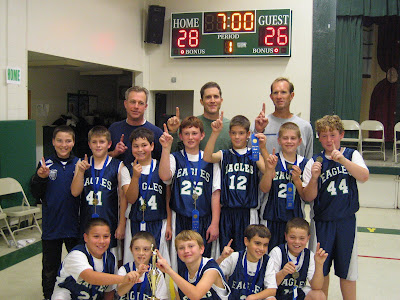