2010 Kings versus Suns plus Brockness Monster 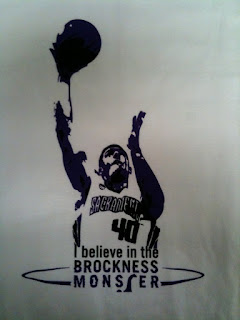 Jack is a big Steve Nash and Phoenix Suns fan. I have encouraged this over the years; if you are going to be a fan of a player, Nash is a great choice.

With the Kings running a number of special sales to sell tickets, I bought a package that included two lower deck tickets (section 113, row t, seats 5 and 6) and a limited edition Jon Brockman t-shirt for the Sacramento Kings versus the Phoenix Suns NBA Basketball game at the last minute and Jack and I went to the game.

After falling behind by 20 points in the second quarter, the Kings rallied to make it a game in the fourth quarter. Beno Udrih tied the game for Sacramento at 103 with a tough jumper with 1:49 remaining. Missing a couple of shots right at the rim, the Kings ended up losing the game by the score of 113 to 109.

To my surprise, Westphal played Jon Brockman rather than Spencer Hawes on Amare Stoudemire for much of the second half.