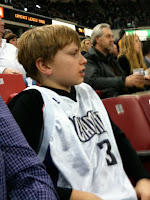 Jack and I went to the Sacramento Kings versus Golden State Warriors Basketball game. After leading by 21 points in the second quarter, the Kings held on to win by the score of 99 to 96.

This is the first game that Kevin Martin has played at home and the seventh game overall since he returned from his injury. He looked awful. Martin was 1 for 7 from the field, 0 for 2 from three and 3 for 3 from the free throw line in 26 minutes. Not only did he look bad, but the Kings offense looked worse with him on the floor than it did when Martin was on the bench. It will be interesting to see how Westphal handles the line-up if Martin continues to struggle.

The Warriors played without leading scorer Monta Ellis. I do not think that the Kings would have won the game if Ellis had been playing. Corey Maggette tried to take up the slack for the Warriors, but he went 3 for 22 from the field.