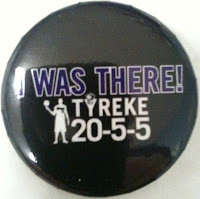 Larkin and I went to the Sacramento Kings versus Houston Rockets NBA basketball game. This was the last Kings home game of the season; when we are drawing tickets, I always make an effort to get the first and last games of the year. Leading 79 to 70 with 5:31 to go in the third quarter, the Kings were outscored 47 to 28 in the remainder of the game and lost by a score of 117 to 107.

In his first game back in Sacramento after being traded to the Rockets, Kevin Martin led all scorers with 39 points on 11 for 20 from the field, 1 for 6 from three and 16 for 16 from the free throw line.

The difference in the game was really Trevor Ariza. He hit 3 straight three pointers in a span of about 1 1/2 minutes at the end of the third quarter to give the Rockets their first lead of the game. Ariza added two more threes in the fourth quarter. He finished the game with 29 points on 10 for 18 from the field, 5 for 9 from three and 4 for 4 from the free throw line.

Tyreke Evans scored 22 points in the first half. Needing just two more points to ensure that he would finish the year averaging 20 points, 5 rebounds and 5 assists, he then missed his next nine shots. Part of the problem was that he was pressing too hard. Each time he touched the ball, music played, the fans stood and cheered and everybody knew he was going to try to shoot. The Rockets also made a defensive change at half-time and had Ariza cover Evans in the second half. Evans eventually got the two points he needed on free throws. He finished with 24 points on 8 for 23 from the field, 0 for 1 from three and 8 for 10 from the free throw line.

Sacramento Mayor Kevin Johnson and California Governor Arnold Schwarzenegger sat together courtside in the Maloof's seats in front of us.